Evacuation Day, The Greatest US Holiday You’ve Never Heard Of

Evacuation Day, once far more popular than Thanksgiving in New York, celebrated with parades, speeches and fireworks, commemorates Nov. 25, 1783, and George Washington and the American troops who... 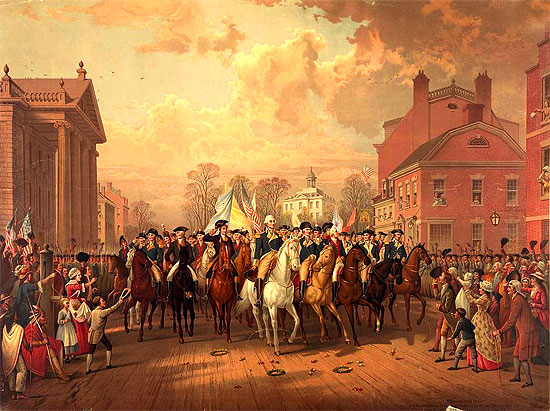 George Washington and the victorious American army enter New York City as the British are driven out
by Geoffrey Grider November 25, 2011
NOW THE END BEGINS SHARE:

Evacuation Day: A celebration of New York and American independence

All day long they marched down the length of Manhattan, 800 soldiers and cavalry of the Continental Army, behind Gen. George Washington. The British army was abandoning its forts, the two old enemies keeping an hour’s march between each other as they proceeded.

The Americans stopped at the Blue Bell Tavern, at what is now 181st St. and Broadway, once a hotbed of patriotic sentiment, where the head of King George III’s statue was stuck on a post in the first days of liberty. They marched through McGowan’s Pass, along what is now Central Park’s East Drive at about 102nd St., then made their way down the Bowery to Pearl St., and turning west on Wall St. — following much of the same route along which they fled in a desperate retreat from British troops seven years before.

The landscape about them was unrecognizable, “the island . . . totally stripped of trees,” an astonished Washington reported. Most of the villages of upper Manhattan had been burned and looted. It was, one observer said, “one general scene of ravage and desolation.”

Today is a holiday, too. Evacuation Day, once far more popular than Thanksgiving in New York, celebrated with parades, speeches and fireworks, commemorates Nov. 25, 1783, and the troops who reclaimed the city that day from the British Empire.

New York was the last piece of the original 13 colonies surrendered by the British, who had held it since shortly after the Declaration of Independence in 1776, leaving only when the Treaty of Paris was finally signed.

That occupation had not been kind to the city. Gen. Henry Clinton, the city’s commandant for four years, wanted “to gain the hearts and subdue the minds of America,” but his aide-de-camp, Lord Francis Rawdon, wrote of giving “free liberty to the soldiers to ravage at will” so that “these infatuated wretches” would understand “what a calamity war is.”

Worst of all were conditions in the rotting British prison ships, where thousands of American prisoners-of-war were kept. Some 11,500 died in all — more than the sum of all Americans killed on the battlefield throughout the Revolution.

Survivors were described as “mere walking skeletons . . . overrun with lice from head to foot.” (Today, those who died there are remembered with a monument in Brooklyn’s Fort Greene Park.)

Few hearts or minds were won over. But peace almost accomplished for the British what six years of fighting had not. Encamped up in Newburgh, it had taken all of Washington’s authority to keep his disgruntled, unpaid officers from marching on Congress to demand their money.

Today, though, was his triumph. As he led his men into the ravaged city, patriotic flags appeared from windows everywhere. In a final taunt, the Brits had nailed a Union Jack to a flagpole at the Battery, then greased the pole. Little did they know that pole climbing would become a trademark of Evacuation Day.

“The troops just leaving us were as if equipped for show,” a woman watching the scene wrote, “and with their scarlet uniforms and burnished arms, made a brilliant display. The troops that marched in, on the contrary, were ill-clad andweather-beaten, and made a forlorn appearance. But then they were our troops, and as I looked at them, and thought upon all they had done for us, my heart and my eyes were full.”