House Judiciary Committee uncovers that head of the Department of Homeland Security - Janet Napolitano - has given top secret security clearance to members of the Muslim Brotherhood. And... 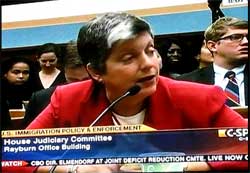 House Judiciary Committee uncovers that head of the Department of Homeland Security – Janet Napolitano – has given top secret security clearance to members of the Muslim Brotherhood. And not only does she appear largely uninformed, she looks like she doesn’t really care.

I am quite sure that when the log is removed off of the Janet Napolitano-run Department of Homeland Security, the amount and number of creepy, crawling things that will come to light will tantalize and disgust even the most jaded Washington watcher.

From Jihad Watch: Homeland Security is on the hot seat. Back in October 2010, DHS Secretary Janet Napolitano named the devout Muslim Mohamed Elibiary to the Homeland Security Advisory Council. The Texas Department of Public Safety now says that Elibiary may have been allowed to gain access to a highly sensitive database of intelligence reports, and then allegedly shopped some of the material he found in that database to a media outlet for a story about “Islamophobia” in the Public Safety Department.

Who else is the devout Elibiary shopping sensitive intel to? Mohamed Elibiary was one of the speakers at a December 2004 conference in Dallas entitled “A Tribute to the Great Islamic Visionary,” that is, the Ayatollah Khomeini, leader of Iran and the violent Muslim global revolution to install a universal Islamic government.

When Rod Dreher of the Dallas Morning News challenged him about his appearance at this conference, Elibiary threatened Dreher, writing: “Expect someone to put a banana in your exhaust pipe.” I warned about Elibiary’s appointment back in 2010.

It is bad enough that Napolitano appointed Elibiary to the Homeland Security Advisory Council in the first place, but it gets even worse. When questioned last week by Rep. Louie Gohmert, R-Texas, at the U.S. Immigration and Enforcement hearings, Big Sis, Janet Napolitano (with the most disturbing hairdo and hair color that I have ever seen), admitted that she has been giving secret clearance to Muslim Brotherhood-tied operatives here in the U.S.

It was jaw-dropping testimony. Looking like a character in a John Waters film, Janet Napolitano is either clueless or complicit, or outright lying to cover for her Muslim Brotherhood appointments. Napolitano denies being aware of a Muslim Brotherhood-tied operative whom she swore in.

Rep. Gohmert does a spectacular job pressing Napolitano on her knowledge of the story of Mohamed Elibiary. Gohmert asked if she was aware of Elibiary’s activities, and she said she was not. The congressman then further pressed Napolitano on her knowledge of Elibiary’s support for the Ayatollah Khomeini. Again she feigned concern and professed ignorance.

This is the head of the Department of Homeland Security claiming ignorance about an important manifestation of the most dangerous threat to the homeland, the global jihad and Islamic imperialism and expansion. All of her answers indicate that she is being led by her not inconsequential nose by those who seek in their own words to work toward “eliminating and destroying Western civilization from within and sabotaging its miserable house.” source – Jihad Watch