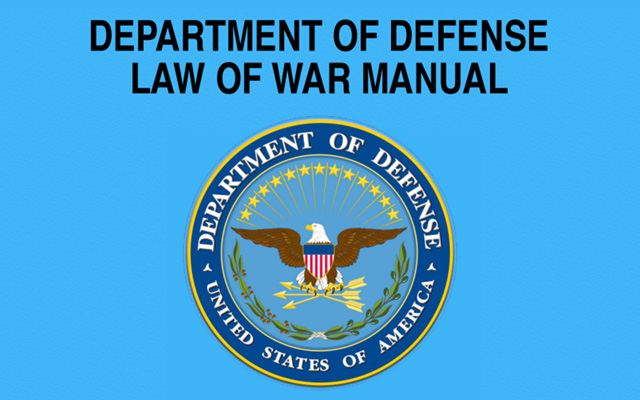 WASHINGTON — New Defense Department guidelines allow commanders to punish journalists and treat them as “unprivileged belligerents” if they believe journalists are sympathizing or cooperating with the enemy.

The Law of War manual, updated to apply for the first time to all branches of the military, contains a vaguely worded provision that military commanders could interpret broadly, experts in military law and journalism say. Commanders could ask journalists to leave military bases or detain journalists for any number of perceived offenses.

The manual adds, “Reporting on military operations can be very similar to collecting intelligence or even spying. A journalist who acts as a spy may be subject to security measures and punished if captured.” It is not specific as to the punishment or under what circumstances a commander can decide to “punish” a journalist.

Defense Department officials said the reference to “unprivileged belligerents” was intended to point out that terrorists or spies could be masquerading as reporters, or warn against someone who works for jihadist websites or other publications, such as al-Qaida’s “Inspire” magazine, that can be used to encourage or recruit militants.

Another provision says that “relaying of information” could be construed as “taking a direct part in hostilities.” Officials said that is intended to refer to passing information about ongoing operations, locations of troops or other classified data to an enemy.

Army Lt. Col. Joe Sowers, a Pentagon spokesman, said it was not the Defense Department’s intent to allow an overzealous commander to block journalists or take action against those who write critical stories.

“The Department of Defense supports and respects the vital work that journalists perform,” Sowers said. “Their work in gathering and reporting news is essential to a free society and the rule of law.” His statement added that the manual is not policy and not “directive in nature.”

But Ken Lee, an ex-Marine and military lawyer who specializes in “law of war” issues and is now in private practice, said it was worrisome that the detention of a journalist could come down to a commander’s interpretation of the law.

If a reporter writes an unflattering story, “does this give a commander the impetus to say, now you’re an unprivileged belligerent? I would hope not,” Lee said.

“I’m troubled by the label ‘unprivileged belligerents,’ which seems particularly hostile,” said Kathleen Carroll, AP’s executive editor. “It sounds much too easy to slap that label on a journalist if you don’t like their work, a convenient tool for those who want to fight wars without any outside scrutiny.” source