Christian Peter Gunner, 63, pruned the trees so the words 'Jesus I am the way, the truth and the life' are visible from above his farm near Chiddingly, West... 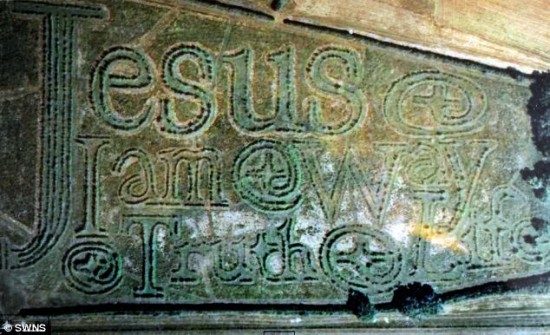 A Christian farmer has spent years planting thousands of willow trees to create a heavenly message that can only be read from above. Christian Peter Gunner, 63, pruned the trees so the words ‘Jesus I am the way, the truth and the life’ are visible from above his farm near Chiddingly, West Sussex.

The father of five had the idea to create the Bible verse design in the 1990s – and has now made his vision a reality in a field near the home he shares with wife Faith.

He first mapped out the pattern on a computer and then mowed out the shape before using a tape measure and string to mark where the trees should go. Mr Gunner planted the trees – which if laid out end to end would reach more than a mile – himself, with the help of a few volunteers.
He has since spent decades pruning and tending to the ‘many thousands’ of willow trees, which take up seven acres of land.

The words are taken from John 14:6 in the Bible when in answer to Thomas’s question: ‘How can we know the way?’, Jesus said: ‘I am the way, the truth and the life’.

Mr Gunner made a plan on paper and decided to do a ‘T’ in an @ sign instead of writing the word ‘the’ because he felt it looked better and was less intricate.

He said: ‘The idea just came to me one day’

‘I am not even sure why I chose that part of the Bible, other than Jesus is saying a lot about himself in that passage. ‘In a way the maze is a lot like life, nobody knows what it looks like from above. ‘You can wander through life confused when in fact it does make sense from a different perspective.’

He created the words without being able to view it from above and only saw it in 2005 when a police officer neighbour gave him an aerial picture taken from a helicopter. Since then, Mr Gunner has been able to use Google maps to view his work of art.

He said: ‘There are a couple of things I would do differently and some tweaks I would make, but overall I am happy with it.’ Mr Gunner invites people from his local church as well as friends and family to use the maze. There is also a public footpath running along the side of the field.

But the words have remained virtually unnoticed by anybody but local residents since they were planted. He added: ‘Every time I see a plane go over I look at it and say a little prayer. ‘I hope that somebody sees it and feels inspired by it.’ source – Daily Mail UK