Common criminals. Occupy Oakland protesters claimed victory after they shut down one of the nation's busiest shipping ports - escalating a movement whose tactics had largely been limited to... 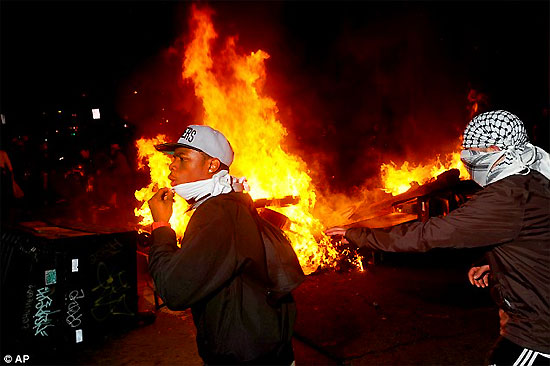 Occupy Oakland in flames: Cops use tear gas and protesters are run over on violent night as they shut-down busy shipping port

Occupy Oakland protesters claimed victory after they shut down one of the nation’s busiest shipping ports – escalating a movement whose tactics had largely been limited to marches, rallies and camps.

In a five-hour stand-off protesters vandalised businesses and smashed bank windows, as they tried to shut down the city – and police appeared to respond using tear gas and flash bang grenades.

The California demonstrators blocked operations at the city’s port and stopped traffic on Wednesday in protests against economic inequality and police brutality, marred by scattered vandalism. 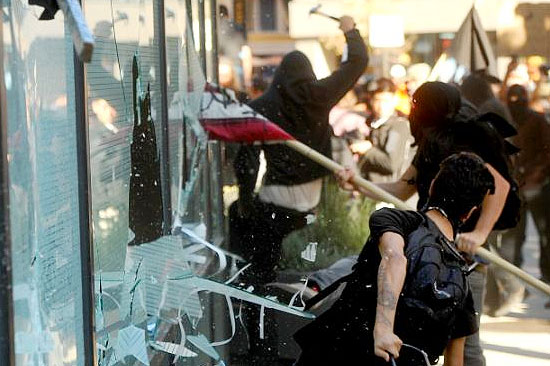 Police in riot gear arrested dozens of protesters who had marched through downtown to break into a vacant building, shattering windows, spraying graffiti and setting fires along the way.

‘We go from having a peaceful movement to now just chaos,’ protester Monique Agnew, 40, said.

Around 3,000 people converged on the Port of Oakland, the nation’s fifth-busiest harbour, swarming the area and blocking exits and streets with illegally parked vehicles and chain-link fences.

Port officials said they had to cease maritime operations, citing concerns for workers’ safety – but hope to resume operations on Thursday and that their workers can get to their jobs safely. source – Daily Mail UK