Algeria's Islamists, in the political wilderness since their last attempt to win power dissolved into civil war, are now trying again, galvanized by the success of their brethren elsewhere... 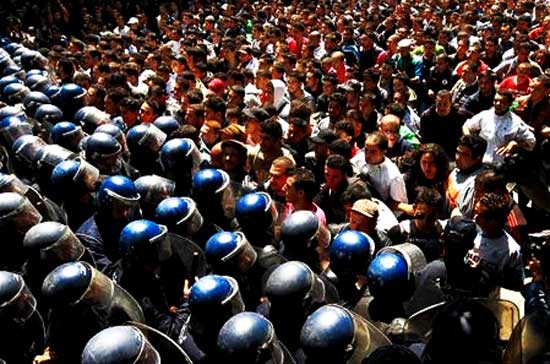 Riot policemen clash with university students from marching during a demonstration in which they demand political change in Algiers May 2, 2011. Credit: Reuters/Zohra Bensemra
by Geoffrey Grider December 8, 2011
NOW THE END BEGINS SHARE:

(Reuters) – Algeria’s Islamists, in the political wilderness since their last attempt to win power dissolved into civil war, are now trying again, galvanized by the success of their brethren elsewhere in north Africa in the wake of the “Arab Spring”.

Riot policemen clash with university students from marching during a demonstration in which they demand political change in Algiers May 2, 2011. Credit: Reuters/Zohra Bensemra

Most Islamists in Algeria have been excluded from political life since the conflict, but in the past few months they have shown renewed signs of activity, much of it conducted from exile to dodge the attentions of the Algerian state.

They have set up a satellite television station based in Europe, sent delegations to Arab countries that saw revolutions this year, and made tentative forays into anti-government protests.

Their chances of success are slim: they are divided into rival ideological camps, hemmed in by the powerful Algerian security apparatus, and, most importantly, discredited in the eyes of many people by a conflict in which they took part and which killed an estimated 200,000 people.

But they see an opportunity in the upheavals of the “Arab Spring,” which have this year unseated entrenched secularist leaders. In neighboring Tunisia, a previously outlawed Islamist movement has come to power, while in Egypt Islamists have taken a strong early lead in multi-stage parliamentary elections.

“Tunisia was an example and launcher of this (Arab Spring) revolution,” said Abdullah Anas, a London-based member of the leadership council of the Islamic Salvation Front (FIS), which is banned in Algeria.

“It could be a very good example for Algeria.”

Any Islamist revival in Algeria, an OPEC member and supplier of about a fifth of Europe’s imported gas, would have first to shed the burden of the country’s bloody history.

Twenty years ago, FIS was poised to win a legislative election, called after street protests forced the authorities to loosen their grip on power. FIS said it would impose an Islamic state.

The military-backed government stepped in to annul the election. The Islamists took up arms and Algeria slipped into a conflict of horrific violence. Civilians had their throats slit in the street; in the mornings, people woke up to find their towns littered with bodies.

A rump of Islamists, now operating under the banner of al Qaeda in the Islamic Maghreb, is still fighting. They periodically ambush security forces in the countryside, kidnap Westerners and stage suicide bombings.

But the violence has subsided considerably. A huge security crackdown has rounded up thousands of insurgents. Others have laid down their arms and been granted an amnesty, in exchange for an undertaking to stay out of politics.

This legacy is the biggest obstacle to any comeback by Algeria’s Islamists.

“Since then (the conflict), the Islamist was no longer seen as a hero who stands up against tyranny,” said Soheib Bencheikh, a theologian who used to be the chief cleric at the mosque in Marseilles, France, where there is a large Algerian community.

“On the contrary, he became, in the eyes of public opinion, accountable for the pain and suffering of the people,” Bencheikh told Reuters.

A fear of a return to violence helps explain why Algeria has this year remained relatively calm while neighboring countries have been convulsed by unrest.

But the Islamists still believe that Algeria is ripe for change, and are beginning to take practical steps.

Starting in November, a group of exiled Islamists with links to FIS set up a Europe-based television station, called Rachad TV. Carried by the Atlantic Bird 7 and Nilesat satellites , the station can be picked up in Algeria, where most homes have a dish.

It broadcasts political and social programs where opposition leaders and activists — most of them harshly critical of the government — are invited to comment on Algeria.

At the top of the station’s homepage on the Internet, there is a link to show viewers “how to free your country”, and a second link to help them “organize and participate in unrest.”

The exiles say they are also building contacts with other countries where “Arab Spring” revolts have propelled Islamists into a position of power.

Rachad says on its website that it sent a delegation to Libya in late September to meet officials in the new government, in which Islamists have a prominent role.

Abdullah Anas, the exiled Islamist in London, said there had also been contacts with Rachid Ghannouchi, the head of the moderate Islamist Ennahda party. Since an election in October his party leads Tunisia’s coalition government.

Tunisia’s experience had proved that it is possible to open up the political space in north Africa, said Anas.

“Everyone in Algeria must understand that Algeria has room for all … no matter what opinions you have,” he said, calling for a lifting of political curbs and the possibility of power-sharing between previously antagonistic groups.

Inside Algeria, the most influential Islamist force are the Salafists, followers of an ultra-purist interpretation of Islam. Unlike the FIS, they are tolerated by the Algerian state because their creed forbids participation in politics.

When Algeria was shaken at the beginning of this year by protests sparked by a spike in food prices, the spiritual leader of the Algerian Salafists, Abdelmalek Ramdani, who lives in Saudi Arabia, issued a religious decree.

It said: “As long as the commander of the nation is a Muslim, you must obey and listen to him. Those who are against him are just seeking to replace him, and this is not licit.”

Nevertheless, there are stirrings of political activity by some Salafist preachers.

Sheikh Abdelfateh Zeraoui, a former FIS member and now a well-known Salafist preacher in the Algerian capital, issued a declaration in October saying the government had to enact urgent reforms.

“Political reforms allowing us to have free political activity are key to the stability of the country. Without reforms the country may explode,” the declaration stated.

The preacher has also tried to organize protest marches in the capital, but these have been blocked by the security forces. “We have been barred from politics,” he told Reuters.

The fact that Algerian Islamists are divided dilutes their ability to stage a comeback, said Mohamed Mouloudi, an editor and specialist on Islam.

“They are no longer speaking with one voice,” Mouloudi told Reuters.

Even so, a debate is now under way in earnest within the Algerian ruling elite, for the first time since the conflict began 20 years ago, about giving Islamists a role in politics.

The focus for that debate — which, like much of Algerian politics, is conducted behind closed doors — is the question of who will succeed President Abdelaziz Bouteflika when his final term ends in 2014.

One camp within the elite is backing Abdelaziz Belkhadem, a former prime minister and secretary general of the ruling FLN party. He is a secularist but is trusted by the Islamists. Opposing him is a camp of hardline secularists who have backing from the powerful security forces.

Friction spilled out into the open when a group of Belkhadem opponents inside the FLN launched a campaign to have him removed from the party leadership.

“It will be wise to promote a man like Abdelaziz Belkhadem who has good ties with Islamists as well as with decision makers inside the regime,” said Mohamed Lagab, a secularist academic at Algiers university.

“Decision makers should take into account that North Africa will be ruled by Islamists ,” said Lagab. source – Reuters