Islamists seized most seats in the two-stage vote for Egypt's upper house of parliament, the Shura Council, the electoral commission said on Saturday. A commission official said the Muslim... 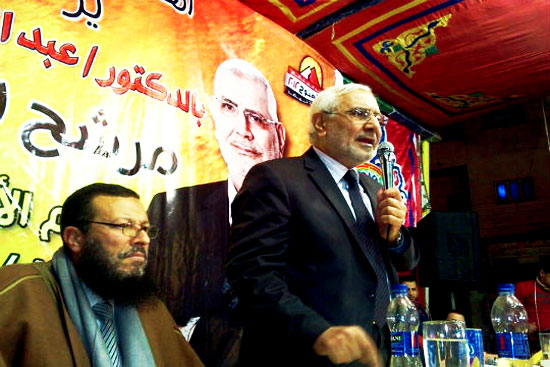 Egypt’s Muslim Brotherhood today claimed an outright majority in the election for the upper house of parliament. The Freedom and Justice Party won 59 percent of the Shura’s 180 seats, the Brotherhood’s newspaper said. - DemDigest.net
by Geoffrey Grider February 25, 2012
NOW THE END BEGINS SHARE:

Islamists seized most seats in the two-stage vote for Egypt’s upper house of parliament, the Shura Council, the electoral commission said on Saturday.

Egypt’s Muslim Brotherhood today claimed an outright majority in the election for the upper house of parliament. The Freedom and Justice Party won 59 percent of the Shura’s 180 seats, the Brotherhood’s newspaper said. - DemDigest.net

The vote, which began on January 29, was for 180 seats in the 270-seat chamber in which the remaining third of seats are allocated by the head of the ruling Supreme Council of the Armed Forces (SCAF), Field Marshal Hussein Tantawi. But electoral commission chief Abdel Moez Ibrahim told reporters on Saturday the turnout in voting for the Shura was not more than 10 percent.

Many polling stations were empty on Wednesday, the final day of voting for the Shura, in sharp contrast to the long queues and active campaigning that marked the People’s Assembly vote. Members of both houses of parliament will now choose a panel to draft a new constitution.

The elections are part of a roadmap for a transition to democratic rule laid out by the ruling military council that took power after the popular uprising that overthrew president Hosni Mubarak last year.

Under the complex system adopted after Mubarak’s ouster, two thirds of the Shura’s 180 elected members are elected via a party-list system, while one third are elected directly.

One third of the members of the Shura Council are nominated by the head of state. The powerful Brotherhood’s FJP won a crushing victory in the lower house elections, contested over three months, to clinch 47 percent of seats.

The election comes amid nationwide protests calling for the ouster of the SCAF led by Tantawi, who was also Mubarak’s long-time defence minister.

Protesters accuse the military council of mismanagement and of human rights abuses. The SCAF has vowed to cede power to civilian rule by June when a new president is elected, but there is a widespread belief it seeks to maintain some degree of control even afterwards. source – Yahoo News