Here comes Sharia law! Final results on Saturday showed that Islamist parties won nearly three-quarters of the seats in parliament in Egypt's first elections since the ouster of authoritarian... 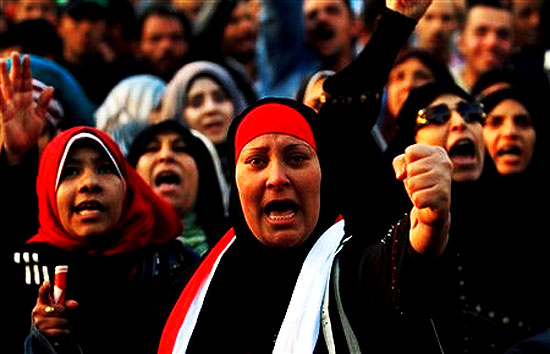 Islamists vow to bring Sharia law to Egypt now that they control it's government
by Geoffrey Grider January 21, 2012
NOW THE END BEGINS SHARE:

CAIRO (AP) – Final results on Saturday showed that Islamist parties won nearly three-quarters of the seats in parliament in Egypt’s first elections since the ouster of authoritarian president Hosni Mubarak, according to election officials and political groups.

The Islamist domination of Egypt’s parliament has worried liberals and even some conservatives about the religious tone of the new legislature, which will be tasked with forming a committee to write a new constitution. It remains unclear whether the constitution will be written while the generals who took power after Mubarak’s fall are still in charge, or rather after presidential elections this summer.

In the vote for the lower house of parliament, a coalition led by the fundamentalist Muslim Brotherhood won 47 percent, or 235 seats in the 498-seat parliament. The ultraconservative Al-Nour Party was second with 25 percent, or 125 seats.

The Salafi Al-Nour, which was initially the biggest surprise of the vote, wants to impose strict Islamic law in Egypt, while the more moderate Brotherhood, the country’s best-known and organized party, has said publicly that it does not seek to force its views about an appropriate Islamic lifestyle on Egyptians.

The two parties are unlikely to join forces because of ideological differences, but both have a long history of charity work in Egypt’s vast poverty-stricken neighborhoods and villages, giving them a degree of legitimacy and popularity across the country in areas where newer liberal parties have yet to get a foothold.

Egypt’s elections commission acknowledged that there were voting irregularities, but the vote has been hailed as the country’s freest and fairest in living memory.

The liberals who spearheaded the revolt that toppled Mubarak struggled to organize and connect with a broader public in the vote, and did not fair as well as the Islamists.

The Egyptian bloc, which is headed by a party founded by Christian telecom tycoon Naguib Sawiris, said it won 9 percent of the seats in parliament. Egypt’s oldest secular party, the Wafd, also won around 9 percent. source- My Way News