DOCTOR DOOM: Anthony Fauci’s Push For AZT To Treat HIV AIDS Killed My Brother in 1988, And Here In 2021 His Miserable Advice Is Still Just As Deadly

Anthony Fauci in 2021 is the same low-information, scientifically ignorant and duplicitous person he was back in the last 1980's, only now he is trying to be the voice of the COVID crisis. He has contradicted himself repeatedly on his COVID guidance to the point where if Anthony Fauci said the sky was blue, I would immediately look up to verify his statement. In June of 2020, Fauci laughed at the idea of people wearing a mask, then 4 months later he reversed that position, claiming his statement had me 'taken out of context'. To which I say, liar, lair, pants on fire.

Dr. Anthony Fauci in 2021 is the same low-information, scientifically ignorant and duplicitous person he was back in the last 1980’s with AZT and the AIDS crisis, only now he is trying to be the voice of the COVID crisis.

How well I recall the day back in the summer 1987 when my older brother Bob, who had just come home from the doctor, shared with me the scary bad news that he was HIV positive. He was my best friend, and we confided in each other with just about everything. It was odd, though, because he seemed perfectly healthy and well. All that would change over the next few months when, under his doctor’s care who was acting on guidance put forth by Dr. Anthony Fauci and his team, my brother began taking AZT. From that point on everything changed, he would never be well again. He was HIV positive, but his cause of death was absolutely AZT.

“Beloved, I wish above all things that thou mayest prosper and be in health, even as thy soul prospereth.“ 3 John 1:2 (KJB)

Within two weeks of starting the AZT pushed by Fauci and his minions, my brother Bob developed pneumonia and had to be hospitalized. It was the ‘progression of HIV’, his doctor said, and following the guidance from Fauci, increased the dosage of AZT. The higher the AZT went, the sicker he got, and soon he would be hospitalized where he would die of a heart attack and liver failure. Watching his death at the hands of his doctor acting on the advice of Fauci, I developed a lifelong distrust of the medical establishment in general, and it caused me to educate myself in natural health which I have continued to this day.

Bob’s death also caused me to seek the Lord, and settle the question of my salvation, and you can read all about that here.

Anthony Fauci in 2021 is the same low-information, scientifically ignorant and duplicitous person he was back in the last 1980’s, only now he is trying to be the voice of the COVID crisis. He has contradicted himself repeatedly on his COVID guidance to the point where if Anthony Fauci said the sky was blue, I would immediately look up to verify his statement. In June of 2020, Fauci laughed at the idea of people wearing a mask, then 4 months later he reversed that position, claiming his statement had me ‘taken out of context’. To which I say, liar, lair, pants on fire.

“You are responsible for all government funded AIDS treatment research. In the name of right, you make decisions that cost the lives of others. I call the decisions you are making acts of murder.” Larry Kramer “An Open Letter to Dr. Anthony Fauci” San Francisco Examiner, June 26, 1988 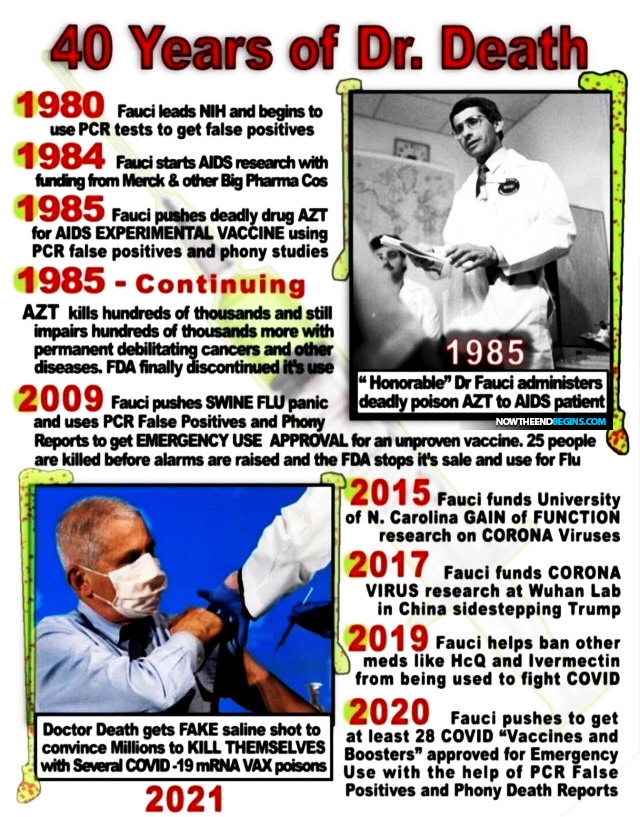 I remember how AZT and the deadly medical advice of Anthony Fauci killed my brother.

There is no human force on this earth that could compel me to ever, under any circumstances, received the current COVID-19 vaccine, why? Because I remember how AZT and the deadly medical advice of Anthony Fauci killed my brother. Because of how my brother died I have never taken a flu shot, never had my children vaccinated, and I only use medicine to combat emergency situations should they arise. Eli Lilly famously said that “if it doesn’t have side effects. it’s not a drug”, and that is very, very true. Hank Aaron took the vaccine on January 5th, he barely lasted two weeks, think you’ll do any better? Why don’t you gamble and find out? Anthony Fauci pretended to take the shot on national television, only problem was he forgot which arm he got the vaccination in, and spoiled the illusion.

When Fauci’s recommendations killed my brother, I had no global platform from which to warn people, but I do now, and I am telling you to disregard whatever this man tells you. Anthony Fauci is a New World Order globalist, a partner with Bill Gates since 2010 in his diabolical scheme to ‘vaccinate the world’, and someone whose medical advice just may get you killed. Now you know, please share this article with everyone you know.

AIDS and the AZT Scandal: The Deadly Medical Guidance Of Dr. Anthony Fauci

August 17, 1989. Newspapers across America banner-headlined that AZT had been “proven to be effective in HIV antibody-positive, asymptomatic, and early ARC patients,” even though one of the panel’s main concerns was that the drug should only be used in a last-case scenario for critically-ill AIDS patients, due to the drug’s extreme toxicity. Dr. Anthony Fauci, head of the National Institutes of Health (NIH), was now pushing to expand prescription.

The FDA’s traditional concern had been thrown to the wind. Already the drug had spread to 60 countries and an estimated 20,000 people. Not only had no new evidence allayed the initial concerns of the panel, but the follow-up data, as Dr. Brook predicted, had fallen by the wayside. The beneficial effects of the drug had proven to be temporary. The toxicity, however, stayed the same.

The majority of those in the AIDS-afflicted and medical communities held the drug up as the first breakthrough on AIDS. For better or worse, AZT had been approved faster than any drug in FDA history, and activists considered it a victory. The price paid for the victory, however, was that almost all government drug trials, from then on, focused on AZT — while over 100 other promising drugs were left uninvestigated.

Celia Farber was the editor and frequent writer of the column and unearthed hard evidence of the cold-bloodedness of the AIDS establishment pushing a drug that was worse than the disease, and killed faster than the natural progression of AIDS left untreated. AZT had been an abandoned cancer drug, discarded because of it’s fatal toxicity, resurrected in the cynical belief that AIDS patients were going to die anyway, so trying it out was sort of like playing with the house’s money. Because the drug didn’t require the usual massively expensive research and trial processes, having gone through that years earlier, it was insanely profitable for its maker, Burroughs Wellcome. It was a tragically perfect storm of windfall profits, something to pacify AIDS activists and the media, and a convenient boom to the patent holders for HIV testing.

Burroughs Wellcome stock went through the roof when the announcement was made. At a price of $8.000 per patient per year (not including blood-work and transfusions), AZT is the most expensive drug ever marketed. Burroughs Wellcome’s gross profits for next year are estimated at $230 million. Stock market analysts predict that Burroughs Wellcome may be selling as much as $2 billion worth of AZT, under the brand name Retrovir, each year by the mid-1990s — matching Burroughs Wellcome’s total sales for all its products last year.

COVID THEATER: ANTHONY FAUCI APPEARS TO GET VACCINATED ON LIVE TELEVISION IN HIS LEFT ARM BUT THEN POINTS TO HIS RIGHT ARM AS INJECTION SITE AFTERWARD

AZT is the only antiretroviral drug that has received FDA approval for treatment of AIDS since the epidemic began ten years ago, and the decision to approve it was based on a single study that has long been declared invalid. The study was intended to be a “double-blind placebo-controlled study,” the only kind of study that can effectively prove whether or not a drug works. In such a study, neither patient nor doctor is supposed to know if the patient is getting the drug or a placebo. In the case of AZT, the study became unblinded on all sides, after just a few weeks.

Both sides contributed to the unblinding. It became obvious to doctors who was getting what because AZT causes such severe side effects that AIDS per se does not. Furthermore, a routine blood count known as a CMV, which clearly shows who is on the drug and who is not, wasn’t whited out in the reports. Both of these facts were accepted and confirmed by both the FDA and Burroughs Wellcome, who conducted the study.

Many of the patients who were in the trial admitted that they had analyzed their capsules to find out whether they were getting the drug. If they weren’t, some bought the drug on the underground market. Also, the pills were supposed to be indistinguishable by taste, but they were not. Although this was corrected early on, the damage was already done. There were also reports that patients were pooling pills out of solidarity to each other. The study was so severely flawed that its conclusions must be considered, by the most basic scientific standards, unproven. READ MORE

In March, Fauci told 60 Minutes that masks should largely be reserved for healthcare providers. In April, the recommendations were broadened to include simple masks for the general public.