The US Ambassador to Libya Chris Stevens and three staff members at the US consulate in Benghazi were deliberately murdered Tuesday night Sept 11 just after memorial ceremonies were... 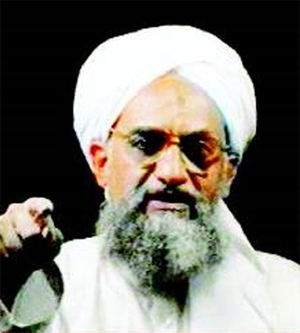 Ayman al-Zawahiri ordered yesterday's attack on the US Consulate in Libya that killed 4 Americans.
by Geoffrey Grider September 13, 2012
NOW THE END BEGINS SHARE:

The US Ambassador to Libya Chris Stevens and three staff members at the US consulate in Benghazi were deliberately murdered Tuesday night Sept 11 just after memorial ceremonies were held in America for the victims of the 9/11 outrage.

Ayman al-Zawahiri ordered yesterday’s attack on the US Consulate in Libya that killed 4 Americans.

DEBKAfile’s counter-terror sources report exclusively that far from being a spontaneous raid by angry Islamists, it was a professionally executed terrorist operation by a professional Al Qaeda assassination team, whose 20 members acted under the orders of their leader Ayman al Zawahri after special training.

They were all Libyans, freed last year from prisons where they were serving sentences for terrorism passed during the late Muammar Qaddafi’s rule.

In a video tape released a few hours before the attack, Zawahri called on the faithful to take revenge on the United States for liquidating one of the organization’s top operatives, Libyan-born Abu Yahya al-Libi in June by a US drone in northwestern Pakistan.

Its release was the “go” signal for the hit team to attack the US diplomats in Benghazi. To mask their mission, they stormed the consulate on the back of a violent protest by hundreds of Islamists against a film said to insult Prophet Muhammed produced by a Florida real estate agent called Sam Bacile, who has been described as of Israeli origin.

“Absolutely, I have no doubt about it. It was a coordinated, military-style, commando-type raid,” House Intelligence Committee Chairman Mike Rogers told Fox News. Based on his own briefings, Rogers said “military movements” were involved. – NY Post

The operation is rated by terror experts as the most ambitious outrage al Qaeda has pulled off in the last decade. According to our sources, the gunmen split into two groups of 10 each and struck in two stages:

1. They first fired rockets at the consulate building on the assumption that the ambassador’s bodyguards would grab him, race him out of the building and drive him to a safe place under the protection of the US secret service;
2.  The second group was able to identify the getaway vehicle and the ambassador’s armed escort and lay in wait to ambush them. The gunmen then closed in and killed the ambassador and his bodyguards at point blank range.

DEBKAfile’s intelligence sources report that the investigation launched by US counter-terror and clandestine services is focusing on finding out why no clue was picked up of the coming attack by any intelligence body and how al Qaeda’s preparations for the attack which took place inside Libya went unnoticed by any surveillance authority. source – DEBKA