"Despite all the (West's) complicated and satanic designs, a new Middle East is emerging without the Zionist regime and U.S. interference, a place where the arrogant powers will have... 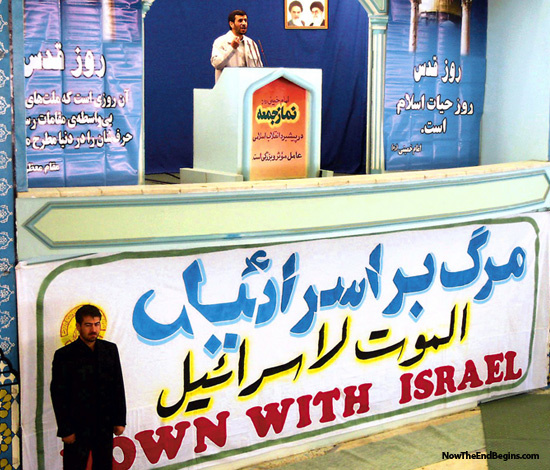 All we are saying, is give peace a…

The Iranian leader spoke as the country marked the 32nd anniversary of its 1979 Islamic Revolution that toppled the pro-U.S. shah Mohammad Reza Pahlavi and brought hardline clerics to power. Ahmadinejad’s remarks came hours after Egyptian President Hosni Mubarak announced he is transferring authority to his deputy but refused to step down, angering hundreds of thousands of Egyptians who have been demanding he relinquish his three-decade grip on power.

Tens of thousands marched down Tehran’s main boulevard in state-organized anniversary festivities, chanting in support of Egyptian anti-government protesters. Some Iranians set an effigy of Mubarak on fire while others shouted: “Hosni non-Mubarak, ‘Mubarak’ (congratulations) on the uprising of your people.”

Iran’s state TV broadcast simultaneous live footage of the gathering at Tehran’s Azadi, or Freedom, Square and that of anti-government demonstrations in Cairo’s downtown Tahrir Square where tens of thousands had gathered by noon Friday.

Iran, which is at odds with the international community over its controversial nuclear program, has sought to portray the popular uprisings in Tunisia and Egypt as evidence of a replay of its own Islamic Revolution.

“Despite all the (West’s) complicated and satanic designs … a new Middle East is emerging without the Zionist regime and U.S. interference, a place where the arrogant powers will have no place,” Ahmadinejad told the crowd. He also urged Egyptian protesters to persevere until there is a regime change. “It’s your right to be free. It’s your right to exercise your will and sovereignty … and choose the type of government and the rulers.”

After his address, Ahmadinejad carried a placard reading, “Death to Israel.” source – My Way