Usama bin Laden has died a peaceful death due to an untreated lung complication, the Pakistan Observer reported, citing a Taliban leader who allegedly attended the funeral of the... 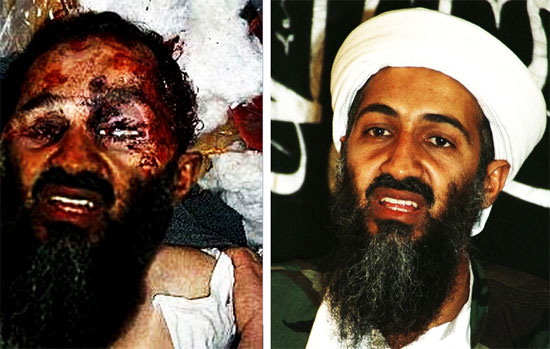 Poor Photoshop abilities notwithstanding, Obama's claim of carrying out the "raid that killed Bin Laden" grows weaker and for farcical by the day.
by Geoffrey Grider January 24, 2013
NOW THE END BEGINS SHARE:

Why hasn’t Barack Obama issued any photographic proof of the SEAL Team 6 raid that “killed Osama Bin Laden”? Well, this story from Fox News, published on December 26th, 2001, might offer a few clues…

From Fox News: Usama bin Laden has died a peaceful death due to an untreated lung complication, the Pakistan Observer reported, citing a Taliban leader who allegedly attended the funeral of the Al Qaeda leader.

“The Coalition troops are engaged in a mad search operation but they would never be able to fulfill their cherished goal of getting Usama alive or dead,” the source said.

Poor Photoshop abilities notwithstanding, Obama’s claim of carrying out the “raid that killed Bin Laden” grows weaker and more nonsensical by the day.

Bin Laden, according to the source, was suffering from a serious lung complication and succumbed to the disease in mid-December, in the vicinity of the Tora Bora mountains. The source claimed that bin Laden was laid to rest honorably in his last abode and his grave was made as per his Wahabi belief.

About 30 close associates of bin Laden in Al Qaeda, including his most trusted and personal bodyguards, his family members and some “Taliban friends,” attended the funeral rites. A volley of bullets was also fired to pay final tribute to the “great leader.”

The Taliban source who claims to have seen bin Laden’s face before burial said “he looked pale … but calm, relaxed and confident.”

Asked whether bin Laden had any feelings of remorse before death, the source vehemently said “no.” Instead, he said, bin Laden was proud that he succeeded in his mission of igniting awareness amongst Muslims about hegemonistic designs and conspiracies of “pagans” against Islam. Bin Laden, he said, held the view that the sacrifice of a few hundred people in Afghanistan was nothing, as those who laid their lives in creating an atmosphere of resistance will be adequately rewarded by Almighty Allah.

When asked where bin Laden was buried, the source said, “I am sure that like other places in Tora Bora, that particular place too must have vanished.” source – Fox News