Never mind spiking the football after Osama bin Laden’s death; President Obama has turned his re-election campaign into one big end-zone dance. And last night, on national TV, he... 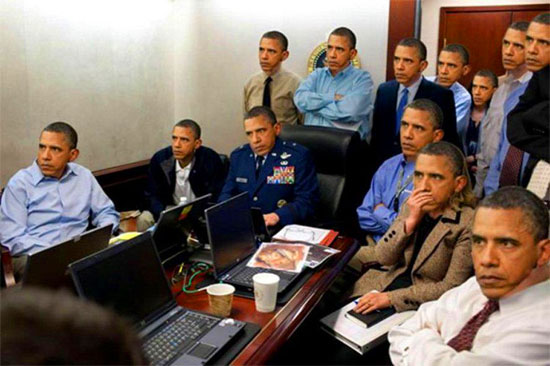 According to the new Obama campaign ad and the President's remarks, this is the team that was responsible for the Osama bin Laden raid.
by Geoffrey Grider May 2, 2012
NOW THE END BEGINS SHARE:

According to the new Obama campaign ad and the President's remarks, this is the team that was responsible for the Osama bin Laden raid.

It’s not just premature; it’s shameless. Obama flew to Afghanistan ostensibly to sign a “strategic partnership” agreement with Afghan President Hamid Karzai. But Obama’s real point was impossible to miss: to air a dramatic, taxpayer-funded campaign ad with a high-value, if expensive, backdrop — and claim credit for ending two wars in that region.

“Over the last three years, the tide has turned. We broke the Taliban’s momentum. We’ve built strong Afghan Security Forces. We devastated al Qaeda’s leadership,” the prez boasted. “And one year ago, from a base here in Afghanistan, our troops launched the operation that killed Osama bin Laden.

Are there no depths to which Obama won’t stoop to get re-elected?

He spoke of emerging from “a decade of conflict abroad and economic crisis at home.” It’s time, he said “to renew America.” Taxpayers should send him a bill. Let’s stipulate, yet again: Obama deserves gratitude for OK’ing the SEALs’ mission. Right after bin Laden’s demise, we wrote: “Three cheers for the president.”

We noted that, despite his earlier opposition to Team Bush practices that figured in bin Laden’s takedown — i.e., terrorist interrogations and keeping Gitmo open — Obama “chose policy continuation over partisan advantage-taking.” The result, we said, was “two bullets in Osama’s head — a very good day’s work.”

The president, for his part, vowed at the time not to “spike the football” — to boast excessively about the deed. Maybe he should’ve added: except during election season. In the last few days, he has:

* Launched a campaign ad with Bill Clinton touting the accomplishment — and suggesting, ludicrously, that Mitt Romney wouldn’t have made the same call.

* Bragged about the mission himself and suggested — misleadingly — that in 2007 Romney doubted that killing bin Laden was worth the effort.

“I assume that people meant what they said when they said it,” Obama huffed this week, in a clear reference to Romney’s ’07 remark. “That’s been at least my practice.”

(Except, perhaps, regarding footballs . . .)

Whatever happened to speak softly and carry a big stick? When it comes to bin Laden, Obama can’t seem to shut up. Too bad. Because, this is one subject where humility is warranted.

For starters, it was SEAL Team 6 that actually dispatched the terror chief, even if the prez gave the OK. A number of SEALs now are reportedly slamming Obama for using them as “ammunition” for his re-election bid.

As Sen. John McCain — a true American hero — put it: Heroes don’t brag. As for ending the wars in the region, Obama’s spin is, let’s say . . .interesting. For one thing, Afghanistan’s future, particularly with US troops drawing down, remains an open question, to say the least.

Even Iraq’s fate is unclear. (And by the way, any success there might have at least something to do with President George W. Bush’s surge in 2007 — not that Obama, who opposed it, would note that.) Trouble is, Obama has little else to crow about. And that’s sad news for America — in more ways than one. source – NY Post