It's nearly 300 million miles away and barreling toward us. The intruder from deep space, called called comet Elenin, crosses Earth's orbit on its inbound leg and again on... 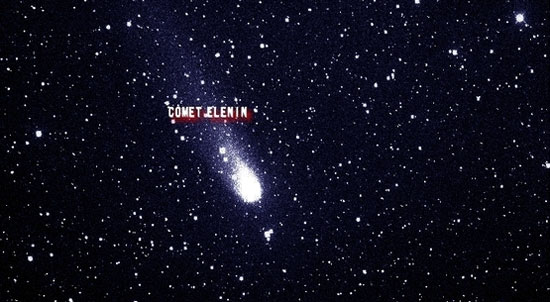 The comet Elenin is coming, no doubt about that much....
by Geoffrey Grider May 16, 2011
NOW THE END BEGINS SHARE:

“It’s nearly 300 million miles away and barreling toward us. The intruder from deep space, called called comet Elenin, crosses Earth’s orbit on its inbound leg and again on its outbound swing around the sun later this year.

The comet Elenin is coming, no doubt about that much....

Russian astronomer Leonid Elenin discovered the innocuous little comet on Dec. 10, 2010, at International Scientific Optical Network’s robotic observatory near Mayhill, New Mexico. Presently the comet is a faint smudge of light in deep sky exposures. By late August comet Elenin should be visible to the naked eye as a dim “fuzzy star” with a tail. Over a few weeks the visitor will speed across the spring constellation Virgo and toward Leo on its outbound leg.

A dizzying collection of doomsday predictions have been linked to comet Elenin. The hysteria was inevitable as anxiety grows over the approach of 2012 — that is supposedly a game-changing year for life on Earth. At least according to some interpretations of the ancient Mayan calendar.

If you believe the gobbledygook on numerous websites and YouTube videos, this is a “renegade comet” that just couldn’t wait for 2012 to mess with the Earth.

Though it’s now over twice as far away from Earth than the sun is, comet Elenin has already been blamed for triggering earthquakes and shifting Earth’s rotation axis. The comet has also been accused of melting ice on Mars and stirring up a storm on Saturn. It’s predicted to flip Earth’s magnetic field.

And that’s just the beginning. There are numerous “Cometgate” allegations of news media and government cover-up, and the existence of hidden comet shelters for U.S. officials. The timing of the MESSENGER spacecraft’s deceleration in orbit around Mercury last week is also suspect because our innermost planet supposedly “aligns” with the comet’s position this month.

Comet Elenin will sweep nearest to Earth on Oct. 16 at a distance of 21 million miles and be moving fast enough to travel the distance from Earth to the moon in under five hours!

The effects of the comet on Earth at closest approach will be as inconsequential as that of a mosquito slamming head-on into an ocean-going supertanker.

Let’s look at the physics. Comet Elenin is a loose agglomeration of volatile ices and dust a few miles across. It is therefore one hundred billionth the mass of our moon. (The relative difference is roughly the same as the mass of a mosquito vs. the mass of an oil supertanker. The comet will pass no closer to us than 84 times the Earth-moon distance.” source – Discovery