The sun erupted Tuesday evening, and the effects should start smacking Earth around 7 a.m. EST Thursday, according to forecasters at the federal government's Space Weather Prediction Center. They... 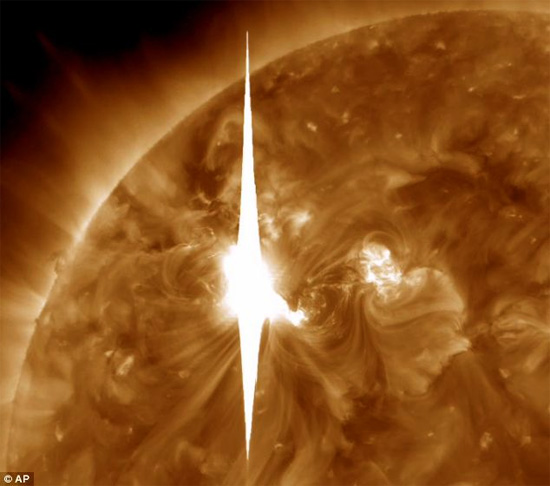 The largest solar flare in five years is racing toward Earth, threatening to unleash a torrent of charged particles that could disrupt power grids, GPS and airplane flights.

The sun erupted Tuesday evening, and the effects should start smacking Earth around 7 a.m. EST Thursday, according to forecasters at the federal government’s Space Weather Prediction Center. They say the flare is growing as it speeds outward from the sun.

‘It’s hitting us right in the nose,’ said Joe Kunches, a scientist for the National Oceanic and Atmospheric Administration. He called it the sun’s version of ‘Super Tuesday.

The solar storm is likely to last through Friday morning, but the region that erupted can still send more blasts our way, Kunches said. He said another set of active sunspots is ready to aim at Earth right after this.

But for now, scientists are waiting to see what happens Thursday when the charged particles hit Earth at 4 million mph.

NASA solar physicist Alex Young added, ‘It could give us a bit of a jolt.’ source – Daily Mail UK