WILDFIRE: French President Macron’s Stunning Defeat In Paris As Its Citizens Rise Up To Reject Globalism And Climate Taxation

The images televised around the world last weekend were of burning cars in the French capital. The retreat by the 40-year-old French leader was mocked by Trump. Macron admitted, via his prime minister, that he’s not been able to connect with the French people. “No tax merits putting our nation’s unity in danger,” Edouard Philippe said in a televised address. The trouble for opponents of Trump-style nativism and protectionism is that there’s no one else to take up his mantle, Dungan said.

Less than a month ago, French President Emmanuel Macron staked his claim as the flag-bearer for globalism. In a speech to 60 world leaders at the Arc de Triomphe, he eulogized the United Nations and declared nationalism the “betrayal” of patriotism.

Don’t let the fake news media steal this story from you by underreporting on it, what is happening in France right now is very important. The French people have risen up en masse to reject the globalist policies of their boy president Macron, and to reject the Climate tax he is attempting to place on the backs of the French people.

“France is no longer France. And this world better be very careful, and they better get very tough and very smart.” Donald Trump, July 27, 2016, as presidential candidate at a rally in Doral, Florida.

You see, the real and actual goal of the proponents of the Climate Change movement has nothing to do with the climate, and everything to do with global domination and enslavement. Why do think there is a tax attached to it? A wise man once said, “when something doesn’t make sense, there’s a buck in it!”. And he was right.

President Trump seemingly stood alone when he walked away from the Paris Climate Accord last year, and the gathering of global leaders last month. But the people of France, and the 63 million in America who voted him in office, are proudly standing with him now. Trump was right about the Climate Change Taxation movement, it’s a hoax, and as Paris burns right now all of Europe is paying close attention.

FROM BLOOMBERG: Last Saturday, tear gas and cobblestones flew in the same part of Paris as protesters trashed the iconic monument and demanded Macron’s embattled government withdraw a proposed fuel-tax increase. For the first time in his presidency, he backed down. It was a humbling moment for opponents of the populist revolts that spawned Donald Trump.

Europe has seen many a critical juncture in recent years, from the Greek debt crisis to the anti-immigrant backlash against refugees and Britain’s Brexit vote. Rarely, though, have so many political vultures been circling around one leader with so much at stake for the world order.

Poland is flirting with the far right and nationalist parties cajoled by Hungarian Prime Minister Viktor Orban are plotting a rebellion at European Parliamentary elections in May. Meanwhile, Italy has collided with the European Union by taking a defiant stand on its budget spending. 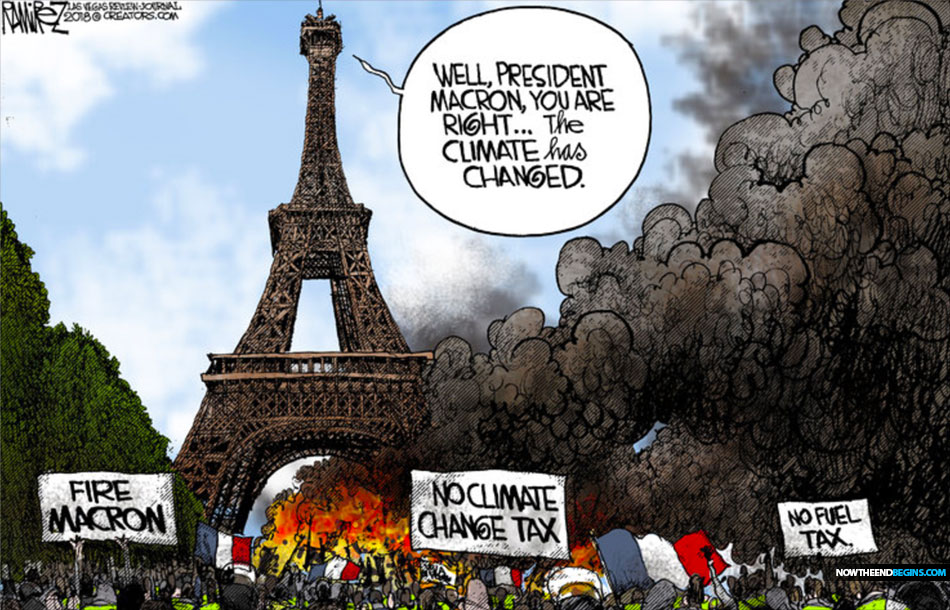 With the EU’s erstwhile firefighter, Angela Merkel, planning to step down as German chancellor, the baton was supposed to pass to Macron to uphold liberal democracy.  But Merkel’s power on the world stage was underpinned by a political fortress at home, and the French leader looks anything but solid.

“You can’t make speeches about defending the international order when your popularity is at 20 percent and there are protesters in the street,” said Nicholas Dungan, a Paris-based senior fellow at the Atlantic Council. “It’s very difficult to get your credibility back.”

It’s a stark contrast to the weekend of Nov. 11 as leaders marked a century since the end of World War I. Macron championed the need for global cooperation while Trump cut an isolated figure. Europe’s divisions were laid bare that day as Polish government officials marched through Warsaw with far-right groups to mark the country’s Independence Day. Macron, though, stood firm as Europe’s statesman.

The images televised around the world last weekend were of burning cars in the French capital. The retreat by the 40-year-old French leader was mocked by Trump. Macron admitted, via his prime minister, that he’s not been able to connect with the French people. “No tax merits putting our nation’s unity in danger,” Edouard Philippe said in a televised address.

The trouble for opponents of Trump-style nativism and protectionism is that there’s no one else to take up his mantle, Dungan said. READ MORE

Bill Nye has argued that climate change deniers suffer psychological delusions and cognitive dissonance. Tucker takes him on in an unforgettable debate and shows the world just how little real science the actor Bill knows.