“Blessed Be, Aho, and Amen,” aren’t the words members of the Iowa House of Representatives are accustomed to hear at the closing of the invocation marking the House’s opening... 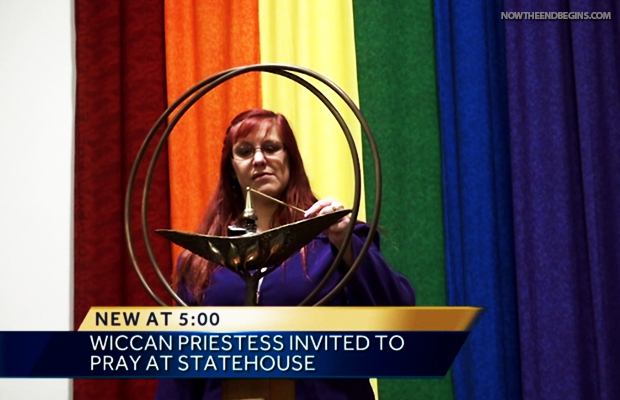 “Blessed Be, Aho, and Amen,” aren’t the words members of the Iowa House of Representatives are accustomed to hear at the closing of the invocation marking the House’s opening ceremonies, but that’s just what happened yesterday when a Wiccan priestess delivered the prayer.

“And have no fellowship with the unfruitful works of darkness, but rather reprove them.” Ephesians 5:11 (KJV)

EDITOR’S NOTE: The first time this happened in American government, almost two years ago, it made all the headlines for days on end. But not anymore. In an amazingly short time, we have gotten used to having occult, pagan prayers being offered up to Satan at the highest levels of local, state and federal government. America is collapsing while we watch. America is being inundated with demonic spirits, and is doing very little to counteract the attack. What America needs is some old-fashioned street preachers with a King James Bible and some gospel tracts. Get back in the game, Christian…to the FIGHT!

“We call this morning to God, Goddess, Universe, that which is greater than ourselves to be here with us today,” said Deborah Maynard, who delivered the first prayer by a Wiccan in the assembly. “By the Earth that is in our bones and centers us, may all here remember our roots and those whom we are here to represent….. We call this morning to Spirit, which is ever present, to help us respect the interdependent web of all existence of which we are a part. Be with this legislative body and guide them to seek justice, equity and compassion in the work that is before them today.”

A number of Christian lawmakers didn’t attend the opening ceremony to protest the priestess’ historic invocation.

Others, like State Rep. Rob Taylor (R-Iowa), turned their backs during the priestess’ prayer. Taylor said he asked himself “What would Jesus do?” and decided Jesus would “be in the presence of a prayer, but peacefully protest.” He added that “everyone has the right to come into our chamber – it is the people’s chamber – and pray and she did and this was the way for me to peacefully protest.”

Members of the Fort Des Moines Church of Christ organized prayers outside the Capitol. “We feel that this is completely out of sync with the traditions of our state and our nation to seek guidance from the occult. We believe it is just not a good idea,” said their Pastor Demastus, according to the Des Moines Register. source