Westport is the first in the nation to offer instruction in programming and robotics with sophisticated humanoid bots made by the French robotics firm Aldebaran. ... 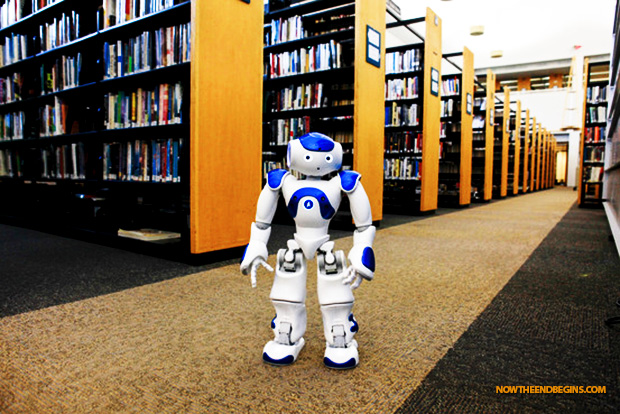 A robot named Nancy, which will be used to teach coding and programming, at the Westport Public Library in Connecticut. Danny Ghitis for The Wall Street Journal
by Geoffrey Grider September 29, 2014
NOW THE END BEGINS SHARE:

Robotics is the next disruptive technology coming into our lives

“But thou, O Daniel, shut up the words, and seal the book, even to the time of the end: many shall run to and fro, and knowledge shall be increased.” Daniel 12:4

WESTPORT, Conn.—They have blinking eyes and an unnerving way of looking quizzically in the direction of whoever is speaking. They walk, dance and can talk in 19 different languages. About the height of a toddler, they look like bigger, better-dressed cousins of Buzz Lightyear.

A robot named Nancy, which will be used to teach coding and programming, at the Westport Public Library in Connecticut. Danny Ghitis for The Wall Street Journal

And soon, “Vincent” and “Nancy” will be buzzing around the Westport Public Library, where officials next week will announce the recent acquisition of the pair of humanoid “NAO Evolution” robots. Their primary purpose: to teach the kind of coding and computer-programming skills required to animate such machines.

While it isn’t unusual for public libraries to offer instruction in programming or robotics, Westport is the first in the nation to do it with sophisticated humanoid bots made by the French robotics firm Aldebaran. In a brief demonstration last week, Alex Giannini, the library’s digital-experience manager, had Vincent kicking a small soccer ball, doing tai chi and taking bows.

“Robotics is the next disruptive technology coming into our lives and we felt it was important to make it accessible to people so they could learn about it,” said Maxine Bleiweis, executive director of the Westport Library. “From an economic-development perspective and job- and career-development perspective, it’s so important.”