Were Massive Chinese Explosions A Warning Shot From United States Over Devalued Yuan?

Was the Tianjin explosion waged as an act of kinetic retaliation by the Pentagon in response to China's devalued Yuan currency war?... 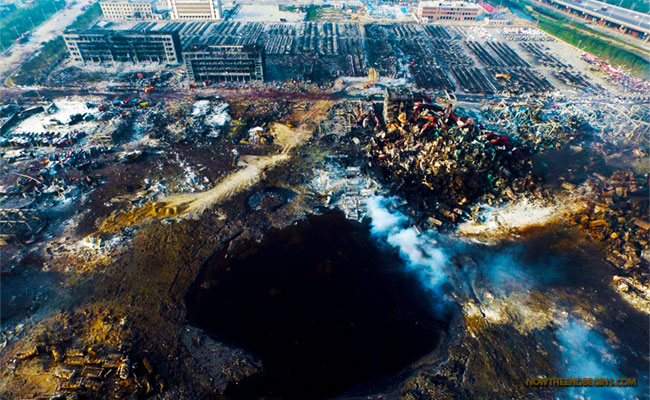 Was the Tianjin explosion waged as an act of kinetic retaliation by the Pentagon in response to China’s devalued Yuan currency war?

EDITOR’S NOTE: We have, for many years now, run stories that originated at NaturalNews.com, and have always found them to be a reliable and trusted source of news and information. So today, we bring you this explosive story (irony intended) and will allow you to make up your own mind about it. One thing is for sure, though, when you look at the photos of the amazing devastation, this was no ordinary explosion. This was just like the World Trade Center bombings. Hey….

The Chinese government has put in place unprecedented secrecy surrounding the mysterious explosion, and aggressive police state tactics are now being invoked to control the flow of information surrounding this event.

The Chinese government’s official explanation for the explosion, which has now killed 114 people, is a complete whitewash. China is going to declare regional martial law in the next 18 days, in order to exercise total control over the movement of people and information. The government has banned reporters from entering the area and has begun arresting bloggers who promote what the government calls “conspiracy theories” regarding the cause of the massive explosion.

The death toll from massive explosions in China’s port of Tianjin has risen to 112 and 95 people, most of them fire fighters, are missing, state media said on Sunday, suggesting the toll will rise significantly. source

China has blacked out reporting on Tianjin in exactly the same way the U.S. media blacked out reporting on Dr. William Thompson, the CDC whistleblower who admitted the CDC buried evidence linking vaccines to autism. In both China and the United States, when the government doesn’t want the citizens to know something, it censors the story across the entire state-run media, invoking “information totalitarianism.”

Chinese dissidents have told Natural News they have reason to believe the attack on Tianjin is a warning shot from the United States, which is terrified that China is on the verge of announcing its own gold-backed currency while declaring a fire sale on U.S. debt holdings.

The actions would collapse the U.S. dollar and destroy the U.S. economy, sending the United States into economic freefall. The “Rod of God” weapon deployment by the U.S. Pentagon, we’re told, was America’s “shot across the bow” to send a powerful warning message to China while disguising the attack as a domestic chemical explosion.

Timeline of events: In mere hours after China devalues currency their currency, the twin explosions rocked the Asian nation:

August 11, 2015: China devalues the Yuan by 1.9%, sending “shockwaves” around the world and setting off “devastating” impact to the U.S. economy.

August 12, 2015: Tianjin struck by Pentagon’s secret “Rod of God” weapon, a space-based top-secret kinetic weapon that can be dropped from high orbit to strike almost any land-based target. The weapon instantly destroys six city blocks on the edge of the city of Tianjin, sending a message to China that’s eerily similar to the message sent by the United States in the dropping of the world’s first atomic weapon on Nagasaki in World War II. (Yes, the USA is willing to drop weapons of mass destruction on civilian populations. It has already done it twice!)

August 16, 2015: Obama issues stern warning “…about the presence of Chinese government agents operating secretly in the United States,” reports The New York Times. “And it comes at a time of growing tension between Washington and Beijing on a number of issues: from the computer theft of millions of government personnel files that American officials suspect was directed by China, to China’s crackdown on civil liberties, to the devaluation of its currency.”

The “Rod of God” weapon consists primarily of a kinetic weapon arriving with unimaginable kinetic energy… more than a small tactical nuclear weapon, in fact, giving it the appearance of a tactical nuke. U.S. websites are now speculating that the Tianjin explosion was a U.S. space-based weapons test involving a “Rod of God” weapon dropped from orbit. “The [resulting] lake [crater] in China proves a 5 kiloton blast, possibly nuclear or possibly from a space based ‘rod from God’ (pictured to the left) weapon [was] deployed by the space plane,” says The Unhived Mind.

“After looking through the images of the soviet nuclear tests, the new lake in China appears to have been made by a slightly sub surface burst of at least a 5 kiloton nuclear bomb… This was NOT an accident and the fracture pattern around the crater proves a sub ground burst. If it was a sub ground burst, then a small nuclear weapon is the biggest possibility because once a nuke has to push dirt, the blinding flash will not happen. A slightly subsurface detonation would explain why camera sensors did not get strange artifacts. And if it was not a nuke, it was something else incredibly huge, but not a fuel air bomb because fuel air bombs will not leave craters.”

Space-based kinetic weapons “dropped” onto targets are explained by Popular Science in this article from 2004:

Martial law will be declared across Beijing in the coming days, dissidents have told Natural News. Meanwhile, the Chinese government — which runs a massive state-controlled firewall that snoops into all internet traffic and blocks VPN access — has added “Tianjin” as a red flag keyword to its internet traffic filtering.

Local police raids have already begun at the locations of bloggers and independent journalists who have attempted to report true stories on what really happened at Tianjin. The Chinese government is engaged in a total cover-up. 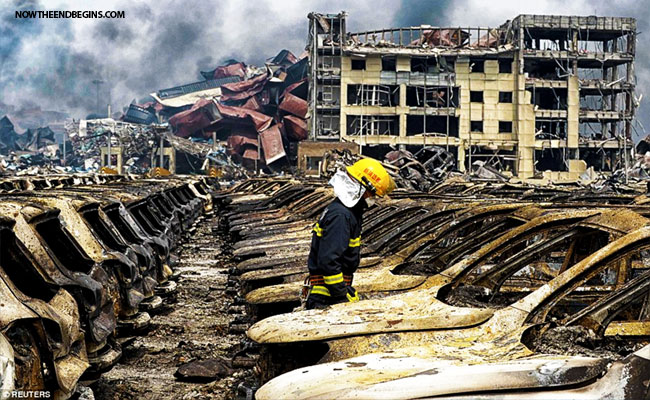 NTEB was the very first news outlet to label the explosions as a nuclear attack. Click to read our original story.

Natural News has learned that the Chinese government is now setting up roadside checkpoints near and around both Tianjin and Beijing. Additional security measures now in place to control the movement of people include:

• All hotels are reporting details of visitors to the government, including passport numbers, nationalities, names and phone calls made from the rooms.

• Tourists who don’t stay in hotels are now required to register with local police or risk arrest. The Chinese government has mandated that it must know the location of every person at all times.

• Red armbands are now being worn by workers to indicate they are serving as Stasi-like obedient police snitches. The red armbands indicate total obedience to the government, and the workers wearing them have all been trained in how to spot dissident behavior. It’s China’s version of “If you see something, say something” just as was pushed in the United States. 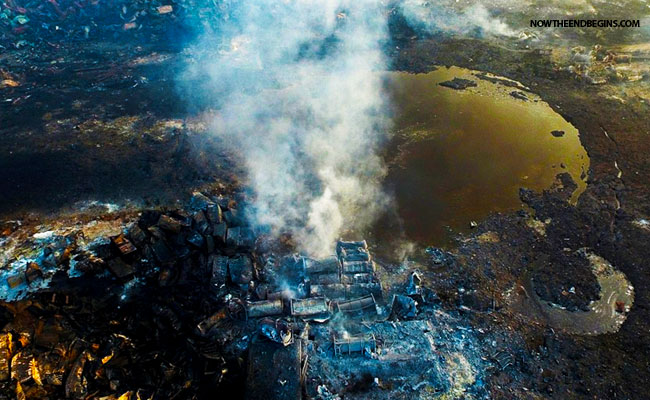 Does this look like the aftermath of a chemical fire to you?

• In preparation for China’s Sep. 3 celebration for the defeat of Japanese occupation — it’s the 70th anniversary — China has banned Japanese writing in most of its large cities. Government propaganda runs 24/7, condemning the Japanese and the horrifying war crimes committed by Japanese soldiers against China. (It’s true, the Japanese committed unimaginable atrocities such as mass-raping women and then chopping them into pieces with machetes to destroy the “evidence.”)

• Helicopter patrols are now routinely witnessed across Beijing and Tianjin, where military choppers are flying in formation as a show of strength.

• Massive populations of laborers are now living in underground cities, underneath the clean, high-tech buildings of Beijing that seem like world-class architectural achievements. But underneath them, an entire class of sickly, impoverished laborers lives like rats, with very little food, poor sanitation and no sunlight. source