John Coleman, an award-winning meteorologist and weatherman with sixty years of experience and founder of theWeather Channel, produced a video explaining the history of the man-made global warming hoax.... 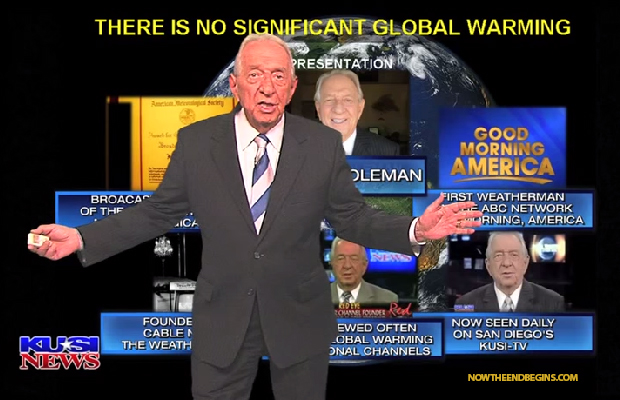 Coleman explains that there is no man-made global warming, and he’s sure of it.

John Coleman, an award-winning meteorologist and weatherman with sixty years of experience and founder of the Weather Channel, produced a video explaining the history of the man-made global warming hoax.

Coleman, a former broadcast meteorologist of the year of the American Meteorological Society (AMS), explains that after being a member for several years, he quit the AMS after it became very clear to him that “the politics had gotten in the way of the science.” Coleman explains that there is no man-made global warming, and he’s sure of it.

Coleman says that if there were evidence of man-made global warming, he would have been dedicated his life to stopping it:

“I love our wonderful planet Earth. If I thought it was threatened by global warming, I would devote my life to stopping the warming!”

Now they call it “climate change” instead of global warming, because the warming has stopped, says Coleman, and that $4.7 billion in taxpayer money is funding “bogus reports” and “bogus research.”

Coleman explains that any warming or “climate change” is extremely negligible from a long-term perspective and certainly nothing unusual or alarming, and points out that Antarctic sea ice is close to an all-time high, and the polar bear population is as high as it’s been in recorded history.

In regards to rising sea levels, Coleman says that:

“It’s rising at about the rate of about six inches per hundred years, as part of this inter-glacial period. When North America was covered in a 400 foot thick ice core at the end of the last ice age, the oceans were low, and then as that ice melted, of course the oceans have risen. That rise has been gentle and is not important.”

At about the 11:30 mark, Coleman begins a detailed explanation about just how the global warming hoax was started and heated up, including how Al Gore got involved in the movement.