The airstrike makes Somalia at least the sixth country where the United States is using drone aircraft to conduct lethal attacks, joining Afghanistan, Pakistan, Libya, Iraq and Yemen. And... 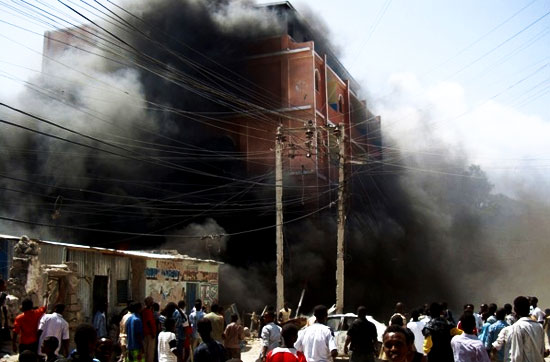 The Muslim Brotherhood never had this much support

A U.S. drone aircraft fired on two leaders of a militant Somali organization tied to al-Qaeda, apparently wounding them, a senior U.S. military official familiar with the operation said Wednesday.

U.S. aircraft and Special Operations commandos have carried out other attacks in Somalia against militants linked to al-Qaeda, but the strike last week appears to have been one of the first U.S. drone attacks in Somalia.

The strike last week against senior members of al-Shabab comes amid growing concern within the U.S. government that some leaders of the Islamist group are collaborating more closely with al-Qaeda to strike targets beyond Somalia, the military official said.

The airstrike makes Somalia at least the sixth country where the United States is using drone aircraft to conduct lethal attacks, joining Afghanistan, Pakistan, Libya, Iraq and Yemen. And it comes as the CIA is expected to begin flying armed drones over Yemen in its hunt for al-Qaeda operatives.

Al-Shabab has battled Somalia’s tenuous government for several years. In recent months, U.S. officials have picked up intelligence that senior members of the group have expanded their ambitions beyond attacks in Somalia. source – Washington Post