A woman on a Ryanair flight filmed what was the moment an unidentified object almost crashed into her plane.... 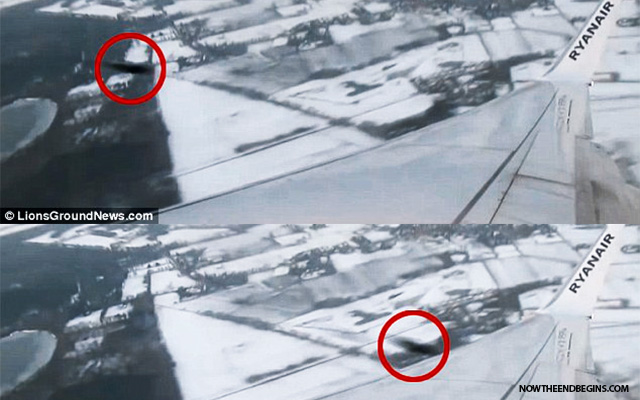 'After four minutes recording this UFO event happened. The engines made a lot of noise and the pilot made suddenly a sharp manoeuvre.
by Geoffrey Grider September 7, 2015
NOW THE END BEGINS SHARE:

A woman on a Ryanair flight filmed what  was the moment an unidentified object almost crashed into her plane.

The passenger, who wishes to remain anonymous, was flying out of Eindhoven Airport in The Netherlands, to Malaga in Spain. Around 10 minutes into the journey, she recorded a small black object flying close to the craft, then passing in and around the wing of the jet. Some have suggested that the UFO could be a bird or a drone.

The video has been shared on YouTube by the Lions Ground news channel, and has been viewed almost 150,000 times. ‘Coincidentally, the passenger was recording because she enjoyed the view,’ the description reads.

‘After four minutes recording this UFO event happened. The engines made a lot of noise and the pilot made suddenly a sharp manoeuvre.

‘The UFO endangered the aircraft. A lot of panic was on that plane.’ It is believed the video was taken in January this year.

However users on the video-sharing channel have put their own ideas forward as to what they think the mysterious object in the sky was.

Lee Cox wrote: ‘I am going with a bird, but I couldn’t rule out a drone either, do they make drones in brown? I don’t think it’s extra-terrestrial though.’ Another commenter adds: ‘It seems to travel fast as its travelling in the opposite direction.. probably large bird or drone.. plane is not that high.’

Despite the apparent size of the object, Yan Beadle says: ‘Have to say i think it was probably a military fast jet at 500+kts passing head on.

The authenticity of the video is question edby Luwdmke however, when he comments: ‘A reliable source has told me this was 100 per cent photo-shopped.’

MailOnline Travel has contacted Ryanair for comments, and is awaiting a response.

Laws on using drones state that they must not fly higher than 400ft and must not be further than 500m away from the pilot. They also cannot be flown within 150m of any other congested area, or within 50m of other aircraft or vehicle. source