The website Now The End Begins posted a story claiming that Christ Church of Moscow, Idaho, had its app suspended from Google Play, the company's official app store. "Now that churches are closed with weekly services moved online, Google begins censoring 'unapproved sermons' and deleting their accounts," the post reads. We rate this claim TRUE because it is supported by our research.

As social distancing orders push more activities online, some are claiming that technology platforms are discriminating against apps because of their content.

I like it when new outlets fact check our work, because as editor-in-chief I fact check our content exhaustively before publishing it. The folks over at USA Today decided to fact check our recent article on Google deplatforming churches for ‘unapproved sermon material’, and they came to the proper conclusion rating it as ‘TRUE’. Thanks, USA Today,we appreciate that, our stories and articles are true, so is our bible teaching on the end times. You might want to fact check some of that stuff, too, it will be a blessing to you. But you’ll need a King James 1611 to check those facts.

“But none of these things move me, neither count I my life dear unto myself, so that I might finish my course with joy, and the ministry, which I have received of the Lord Jesus, to testify the gospel of the grace of God.” Acts 20:24 (KJB)

I am happy this article is getting such attention because we need to put the spotlight on all the Liberal social media platforms, and they are all Liberals, because such discrimination happens all day, every day to Christian churches like Christ Church of Moscow, Idaho, and Christian ministries like Now The End Begins. Facebook put me in jail two weeks ago for ‘posting spam’, that’s what they called some photos I put on my profile of me and my daughter taking a walk in our neighborhood. The censorship is very real, and Christians needs to open their mouths and preach the gospel of the grace of God, and not worry about the outcome. Time is short, let’s get something done for the Lord while time remains.

FROM USA TODAY: The website Now The End Begins posted a story claiming that Christ Church of Moscow, Idaho, had its app suspended from Google Play, the company’s official app store. “Now that churches are closed with weekly services moved online, Google begins censoring ‘unapproved sermons’ and deleting their accounts,” the post reads.

Rod Dreher, a senior editor at The American Conservative, also wrote about the app’s removal, defending Christ Church’s pastors and speculating as to reasons for the app’s removal. The Washington Examiner then published an article on April 16 investigating the incident.

“We presume they’re talking about Pastor @douglaswils’ short lessons on responding faithfully to the COVID-19 crisis. Or maybe Pastor @TJSumpter’s sermon calling God’s people to humble repentance,” the church said in a tweet speculating as to why the app was removed. “Regardless – What gives, @Google?”

The removal of Christ Church’s app was not due to its religious content, a spokesperson for Google told USA TODAY, and Google is not aware of any trends in the removal of church livestreams, the spokesperson also said. 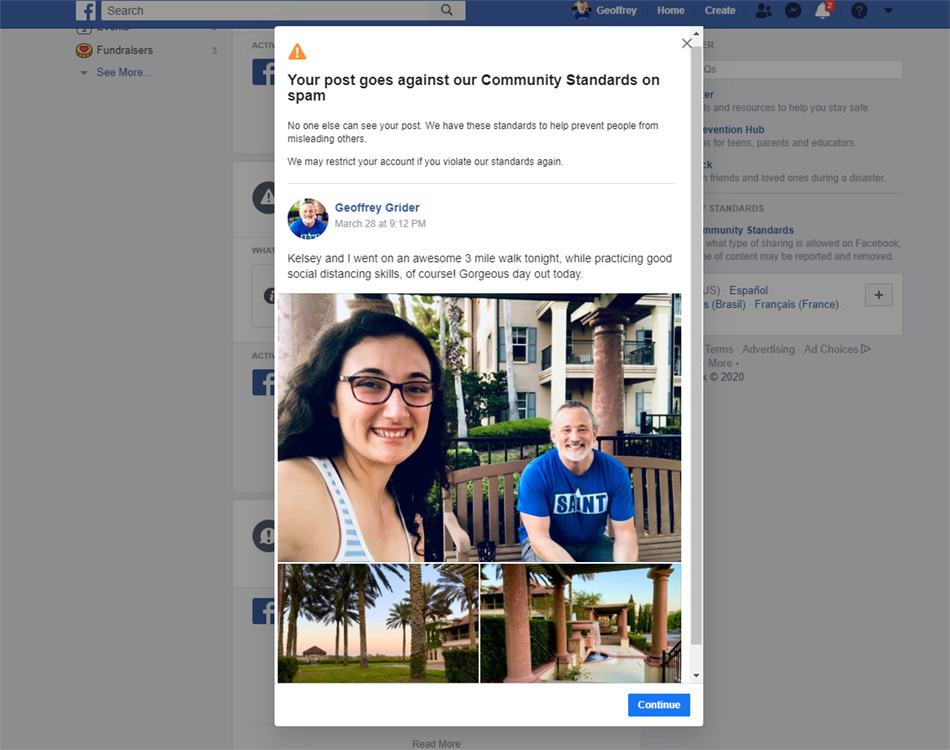 CENSORSHIP BY THE LIBERAL SOCIAL MEDIA PLATFORMS IS VERY REAL, MY POSTING RIGHTS ON FACEBOOK ARE STILL SUSPENDED BECAUSE OF THIS POST.

According to Christ Church, the fellowship’s app was suspended on April 10. The congregation tweeted that day criticizing the move.

Initially, the church received only a generic statement from Google as to why the app was removed, which according to the church stated: “We don’t allow apps that lack reasonable sensitivity towards or capitalize on a natural disaster, atrocity, conflict, death, or other tragic event.”

The language is from Google Play’s official policy banning inappropriate content on the platform. The company has recently sent identical messages to app developers who have used the app store to circulate supposed “coronavirus infection trackers.”

Google later reached out to the church specifying why the app was removed from Google Play. “During review, we found that your app violates the Sensitive Events policy,” the company said in an email to Christ Church. “We don’t allow apps that lack reasonable sensitivity towards or capitalize on a natural disaster, atrocity, conflict, death, or other tragic event.”

According to Google’s spokesperson, once the app is resubmitted after following the message’s instructions, it would be published for download on Google Play.

“So, essentially, merely referencing COVID-19 is putting us out of compliance with their ‘sensitive events’ policy. We are now evaluating the best way forward as we believe this is censorship, and wrong-headed,” Ben Zornes, Executive Minister of Christ Church, told USA TODAY.

YouTube, which is also owned by Google’s parent company Alphabet, has a similar policy in its advertising guidelines specifying that videos that cover controversial issues or sensitive events are not eligible to be monetized for advertisements. The company has used this policy to demonetize videos about COVID-19, which has drawn criticism from some creators on the platform.

“Google came back to us and told us that we could resubmit our app without needing to remove any of the content in question,” Zornes told USA TODAY on Monday. The app is now again available for download on Google Play.

Google suspended an app from the Google Play store that is associated with Christ Church, a Calvinist congregation in Moscow, Idaho. The company removed the app because of repeated references in the app to COVID-19, including blog posts and sermons. Christ Church had criticized the move and had said that it believes this to be censorship. The app was returned to Google Play, the church confirmed to USA TODAY on Monday. There does not appear to be any discrimination against Christ Church based on its religious beliefs. We rate this claim TRUE because it is supported by our research. READ MORE