US Casualty Rate In Afghanistan Under Obama Increases 500%, Yet No Antiwar Protests. Why?

Remember all the Liberal antiwar protesters who camped out in front of Bush's ranch in Crawford, TX? They stayed there for well over a year, made all the headlines,... 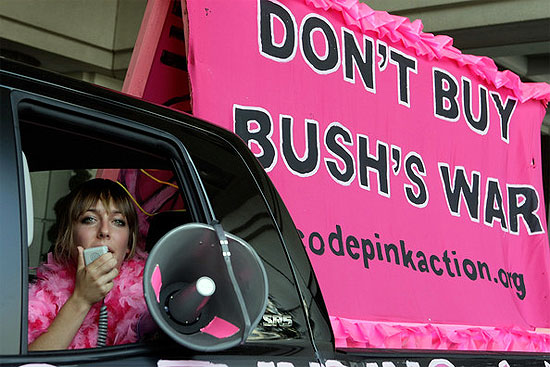 So where is Code Pink?

Remember all the Liberal antiwar protesters who camped out in front of Bush’s ranch in Crawford, TX? They stayed there for well over a year, made all the headlines, and demanded that our troops be brought home. Seemed like a worthy cause, right? So, now that the US death toll in Afghanistan has increased 500% under Obama, I have yet to hear one, single word of protest, not to mention our current illegal war in Libya. Seems like Code Pink was not antiwar war death, they were only anti-Bush.

Remember these people who dogged Bush's every waking moment? Not a peep out of them since Obama took over and raised the casualty rate by 500%

“The average monthly casualty rate for U.S. military forces serving in Afghanistan has increased 5-fold since President Barack Obama was inaugurated on Jan. 20, 2009.

1,540 U.S. troops have been killed in Afghanistan since Oct. 7, 2001, when U.S. forces began fighting in that country to oust the Taliban regime that had been harboring al Qaeda and to track down and capture or kill al Qaeda terrorists.

889 of the 970 U.S. casualties in Afghanistan that have occurred during the Obama presidency—or about 92 percent—have been combat-related casualties. During Obama’s presidency, U.S. troops have given their lives in the service of their country in Afghanistan at an average rate of more than one per day.” source – CNS News