US Ambassador Chris Stevens Was SODOMIZED Before Being Killed

Ambassador Stevens was killed on Tuesday along with three other embassy staff as a group of terrorists attacked the U.S. consulate office in Benghazi, where Stevens was hold up. The mob fired countless gunshots and rocket propelled grenades at the U.S. compound, eventually setting the consulate ablaze. 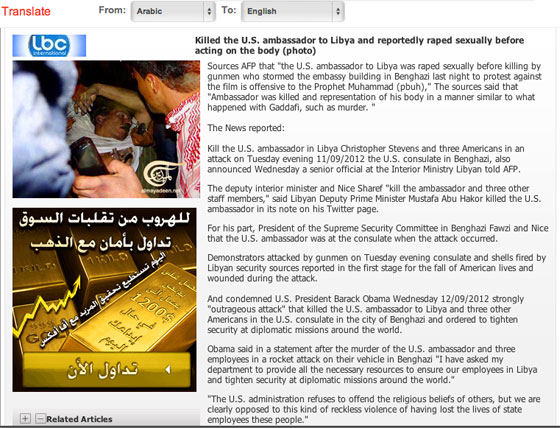 Ambassador Chris Stevens was brutally raped and sodomized in the name of Allah before being executed by Muslim terrorists
by Geoffrey Grider September 15, 2012
NOW THE END BEGINS SHARE:

You may think you know what Islam is all about…but you don’t. The Muslim terrorists who follow Mohammed and murder in the name of Allah don’t just kill their male victims, often times they sodomized them as well. The only question now is, was he dead or alive before they had gay sex with him? Most reports are saying he was sodomized before being killed. Read Sodomy For The Sake Of Islam to increase your knowledge on Islam.

From Lebanon News: The Arabic language website known as Lebanon News (Tayar.org) has just reported the horrific claim that the heavily armed mob responsible for the murder of U.S. Ambassador to Libya, J. Christopher Stevens, 52, actually raped him before he was killed.

The Google Translation of the report follows:

Ambassador Stevens was killed on Tuesday along with three other embassy staff as a group of terrorists attacked the U.S. consulate office in Benghazi, where Stevens was hold up. The mob fired countless gunshots and rocket propelled grenades at the U.S. compound, eventually setting the consulate ablaze.

Also on Tuesday, a violent mob scaled the walls of the U.S. Embassy in Cairo, Egypt, replacing the U.S. flag with that of al Queda’s.

Over his career, Stevens served two diplomatic tours in Libya, and was confirmed as ambassador to that country by the Senate in May. Until Tuesday, only five U.S. ambassadors have been killed in the line of duty, according to the U.S. State Department. source – Examiner