COMPLIANCE WITH THIS PUBLICATION IS MANDATORY. Section 2.11 of the 27-page Air Force Instruction AFI 1-1 Standards of Conduct is the latest salvo in a battle over religious bias... 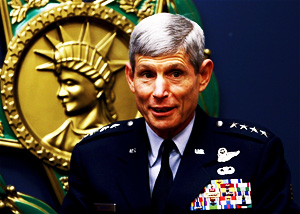 "It certainly is important and binding ... and it could lead to punishment..."
by Geoffrey Grider August 22, 2012
NOW THE END BEGINS SHARE:

Just days before retiring as Chief of Staff of the Air Force, Gen. Norton Schwartz issued a document designed to dictate the conduct of U.S. airmen worldwide — all violations enforceable by military law. For the first time, amid regulations on tattoo size and flag handling etiquette, it laid down the law on religious proselytizing by leaders: Don’t do it.

Section 2.11 of the 27-page Air Force Instruction AFI 1-1 Standards of Conduct is the latest salvo in a battle over religious bias and Christian proselytizing in the military branch. It calls on officers and supervisors to “avoid the actual or apparent use of their position to promote their personal religious beliefs to their subordinates or to extend preferential treatment for any religion.”

The document’s section on religion echoes a memo Schwartz sent out to all Air Force leadership on religion last September, but adds the threat of penalty for violations.

“COMPLIANCE WITH THIS PUBLICATION IS MANDATORY,” the memo says in bold, adding that “failure to adhere to the standards set out in this instruction can form the basis for adverse action under the Uniform Code of Military Justice (UCMJ).”

“It carries a lot of weight inasmuch as it’s careful to point out that an individual who violates it can be subject to court martial,” said Gary Solis, who teaches military law at Georgetown University. “So the things that are covered in the document, which are very wide ranging, open up violations to court martial prosecution, that is federal conviction should there be a conviction. So it carries significant weight.”

What is harder to predict is how AFI 1-1 — called by an Air Force Press release “the capstone act” of Schwartz’s 29-year career — will be interpreted, distributed and enforced where it applies to religion.

“It certainly is important and binding … and it could lead to punishment. But then it could lead to punishment if you wear your hat backwards,” said Elizabeth Hillman, professor of law at University of California Hastings College of Law and President of the National Institute of Military Justice. “It is still going to be up to individual commanding officers to decide what’s OK and what’s not. They have a great deal of discretion.”

As in U.S. public institutions more broadly, there has been a long string of battles between those in the military who want to root out religious content and others, mainly fundamentalist Christians, who argue that to do so impinges on religious freedom. source – NBC News