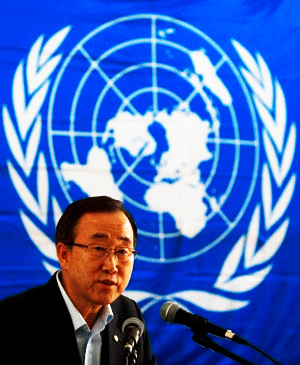 “All of this freedom of expression should not be abused by individuals. … Some people abuse this freedom. This effort to provoke, to humiliate others by using (religious) beliefs cannot be protected in such a way.”

Ban, speaking in advance of the 2012 General Assembly, answered reporters’ questions on the impact of the controversial YouTube video about the Islamic prophet Muhammad which allegedly sparked attacks on U.S. diplomatic posts in Libya and Egypt last week.

The attacks left four dead, including U.S.-Libya Ambassador Christopher Stevens. It was the first time in more than 30 years that a U.S. ambassador was killed in the field.

While Ban was quick to criticize U.S. policy on free speech, he pointedly refused to address other governments that restrict freedom of expression.

Iranian President Mahmoud Ahmadinejad, who has flaunted his government’s official policy of aiming to “eradicate” the state of Israel and Jews in general and who will attend the General Assembly next week, escaped any Ban criticism during his meeting with reporters.

Egyptian President Mohamed Morsi, who issued a muted response to the attack  on the U.S. Embassy in Cairo and who also will visit the General Assembly, received a pass from the U.N. chief.

While insisting that free speech was an “inalienable” human right, Ban added that such “absolute” rights do have limits.

On the controversial YouTube video, Ban broke with Washington’s insistence that such speech is legally permissible and not actionable under U.S. law.

“My position is that freedom of expression, which is a fundamental right should not be abused by such disgraceful, such shameful acts.” The U.S. mission to the U.N. declined to provide any comment on behalf of Ambassador Susan Rice.

Richard Grenell, a senior U.N. diplomat during the Bush administration, was quick to weigh in.

“The secretary-general is wrong; there are no exceptions to freedom of speech,” he said. “There is no U.N. approval process on it. You can certainly disagree with what someone says, but no one has the right to silence another’s voice.”