Take a deep breath, a nice, long sip of hot coffee, and get ready to wrap your mind around what we are about to show you. The fingerprints of one man, working behind the scenes and up to right now unassociated with seemingly unconnected events, shows up on all of it. What is the "it" we are talking about? Chrislam, the One World Religion of the Antichrist that will create the covenant with death and Hell the Jews will make very soon. Sheikh Mohamed bin Zayed is that man, and here is the smoking gun proof we have long been looking for.

What we did not know until just this weekend was that all the efforts in creating Chrislam was only made possible by the efforts of Crown Prince Sheikh Mohamed bin Zayed of the United Arab Emirates.

Buckle up, bible believers, new information coming into NTEB this weekend has found the smoking gun connecting President Trump’s ‘Abraham Accord’ with One World Religion of Chrislam efforts by Pope Francis and the Declaration On Human Fraternity covenant signed in Abu Dhabi back in February of 2019. Peace in the Middle East, the Daniel 9:27 and Isaiah 28 end times covenant with death and Hell, the Abrahamic Faiths Initiative, the Abrahamic Family House, the Abraham Accord, the Vatican, and the One World Religion of Chrislam is all connected by one man, Sheikh Mohamed bin Zayed of the United Arab Emirates.

“Because ye have said, We have made a covenant with death, and with hell are we at agreement; when the overflowing scourge shall pass through, it shall not come unto us: for we have made lies our refuge, and under falsehood have we hid ourselves: Therefore thus saith the Lord GOD, Behold, I lay in Zion for a foundation a stone, a tried stone, a precious corner stone, a sure foundation: he that believeth shall not make haste.” Isaiah 28:15,16 (KJV)

Take a deep breath, a nice, long sip of hot coffee, and get ready to wrap your mind around what we are about to show you. The fingerprints of one man, working behind the scenes and up to right now unassociated with seemingly unconnected events, shows up on all of it. What is the “it” we are talking about? Chrislam, the One World Religion of the Antichrist that will create the covenant with death and Hell the Jews will make very soon. Sheikh Mohamed bin Zayed is that man, and here is the proof.

This includes the recently announced Abrahamic Family House, which will include a church, mosque and synagogue in Abu Dhabi to create mutual understanding among people of all faiths and belief systems. #UAEUSA

ENTER INTO THE END TIMES ONE WORLD RELIGION OF CHRISLAM

For over a hundred years now, bible scholars and commentators have wondered over, and over, and over again about what it would look like when the false peace of 1 Thessalonians 5 between the Jews and the Muslims would begin to take shape. There have been multiple one-off events that looked like something was going to spark, but never actually did. Until now. Now we have a never-before-seen flurry of end times events circling the globe like a whirlwind, creating the One World Religion of Chrislam and luring in the Jews to agree to the upcoming Daniel 9:27 covenant with death and Hell.

“For when they shall say, Peace and safety; then sudden destruction cometh upon them, as travail upon a woman with child; and they shall not escape.” 1 Thessalonians 5:3 (KJB)

“Let no man deceive you by any means: for that day shall not come, except there come a falling away first, and that man of sin be revealed, the son of perdition; Who opposeth and exalteth himself above all that is called God, or that is worshipped; so that he as God sitteth in the temple of God, shewing himself that he is God. Remember ye not, that, when I was yet with you, I told you these things?” 2 Thessalonians 2:3-5 (KJB)

Now, I know what you’re thinking, no really, I know exactly what you’re thinking right now. You’re thinking to yourself that if Sheikh Mohamed bin Zayed is the man behind the scenes in all of these Chrislam connections, where does that leave Emmanuel Macron, the one we say is the 2 Thessalonians 2 “man of sin“? Shouldn’t he be doing all this? Oh ye of little faith, I will leave you with this, take a look. A nice, long, hard look. 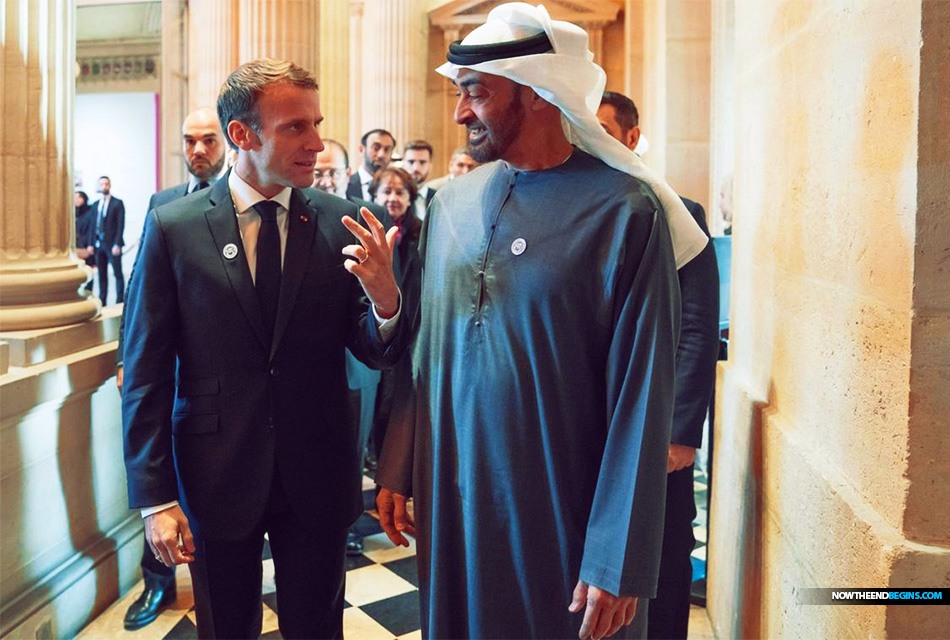 The Crown Prince of Abu Dhabi and Deputy Supreme Commander of the Armed Forces, conducted a meeting with French President Emmanuel Macron as part of an official summit in Paris in 2018.

FROM UAE NATIONAL: The lunch between the two leaders was dedicated to discussing issues of bilateral co-operation as well as signing further agreements in the fields of health and mutual investments. Sheikh Mohamed said the two country’s support values of tolerance, promote dialogue, interaction and coexistence among peoples, civilisations and cultures, reject intolerance and hatred, and work for peace, stability and development in the Middle East and the world, a statement to WAM, the UAE state news agency read.

One agreement for enhanced cooperation in medicine, and a second agreement between the Banque Publique d’Investissement (BPI), the French state investment bank, and Mubadala for a €300 million project, with scope for an additional €700 million to invest in start-up firms promoting innovation in the health sector.

“France tends to send its best ambassadors, its best diplomats to the UAE,” Mr Bitar told The National. “It’s a major Arab partner.” The conversation between the Crown Prince and the French heads of state was expected to touch upon the peace process in Yemen.

A French diplomatic source told The National that the visit, which follows Mr Macron’s landmark trip to open Louvre Abu Dhabi last year was a demonstration of good bilateral relations and co-operation between France and UAE across a whole range of sectors, including educational links, renewable energy, space sector and health.

“It is a diverse partnership in a lot of sectors which enables both countries to closely work together on the international scene, for example, the reinforcement of the task force headed by Mauritanian chief of staff of G5 in Sahel to which the Emirates contributed,” the source said.

Karim Bitar, Senior Fellow at the Institute for International and Strategic Affairs in Paris, said that “France’s relationship with the UAE has been particularly strong in the past 10 years and has been getting even stronger.”

France has significant defence contracts with the UAE and has strong political, cultural and economic ties. With €3.6 billion in French exports to the Emirates, the UAE has become France’s second-largest export destination in the Gulf. The volume of bilateral trade was at €4.66 billion in 2016, and more than 600 French companies are registered in the UAE. READ MORE