This video was taken in front of the student activities center on the north side of the UCLA campus near the athletic field off Sunset Boulevard. Friday's Islamic call... 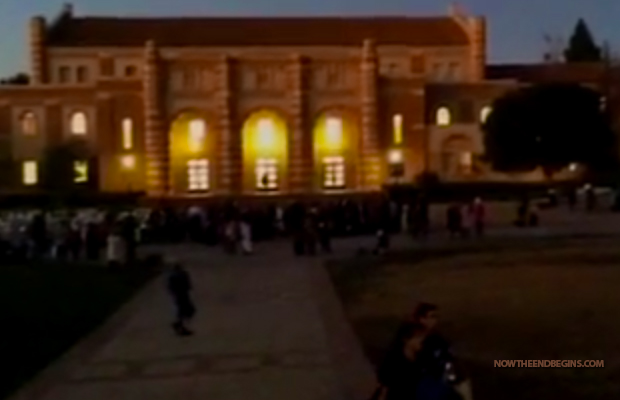 “And have no fellowship with the unfruitful works of darkness, but rather reprove them.” Ephesian 5:11 (KJV)

Just a few days ago, NTEB was one of the very first outlets to expose the plans for forced broadcasting of the azan, or the Muslim call to prayer, on the campus of Duke University. A justifiable outcry compelled Duke to cancel those plans, but today is has come to light that UCLA in California has been doing just that for quite sometime.

This video was taken in front of the student activities center on the north side of the UCLA campus near the athletic field off Sunset Boulevard. Friday’s Islamic call to prayer. Non-Muslim students are forced to participate, while the following words are sung:

Ashhadu an la ilaha illa Allah
I bear witness that there is no god except the One God.
(said two times)

For the pre-dawn (fajr) prayer, the following phrase is inserted after the fifth part above, towards the end: