Mattel’s first promotional spot for the $29.99 product features a series of kids who go by various pronouns—him, her, them, xem—and the slogan “A doll line designed to keep labels out and invite everyone in.” With this overt nod to trans and nonbinary identities, the company is betting on where it thinks the country is going, even if it means alienating a substantial portion of the population. A Pew Research survey conducted in 2017 showed that while 76% of the public supports parents’ steering girls to toys and activities traditionally associated with boys, only 64% endorse steering boys toward toys and activities associated with girls.

The doll can be a boy, a girl, neither or both, and Mattel, which calls this the world’s first gender-neutral doll, is hoping its launch on Sept. 25 redefines who gets to play with a toy traditionally deemed taboo for half the world’s kids.

Mattel says that ‘gen-alpha’ kids, or children under the age of 10 ‘see gender very differently’, and because of that they need a gender-fluid and gender neutral doll to identify with. But hold on a second, can anyone tell me why that children under the age of 10 ‘see gender differently’? Who taught them that? I’ll tell you why. It’s because the satanically-driven public school system and the LGBTQ+P for Pedophile mafia has been ramming it down their throats since they started preschool, that’s why. And now that they have brainwashed an entire generation of children, they deem it only fitting they have toys that now represent their new gender fluid thinking. We have warned you night and day since NTEB started back in 2009 that this was coming, and now it’s here.

“Therefore watch, and remember, that by the space of three years I ceased not to warn every one night and day with tears.” Acts 20:31 (KJV)

Adolf Hitler in the early 1920’s looked into the future, and realized that if he was ever going to come to power over Germany, he would need to control an entire generation of Germans. In order to accomplish this goal, he created the Hitler Youth in 1922, and indoctrinated them with Nazi ideals. When he came to power in 1933, he already controlled the minds of over a million children who were now in their early 20’s. Evil genius. And this is exactly what the LGBTQ+P for Pedophile Movement is doing right now with your children. In just a few short years from today, should the Lord tarry, the LGBTQ+ Army will be quite large indeed, large enough to rule an entire nation. It worked for Hitler, and it will work for them, too. 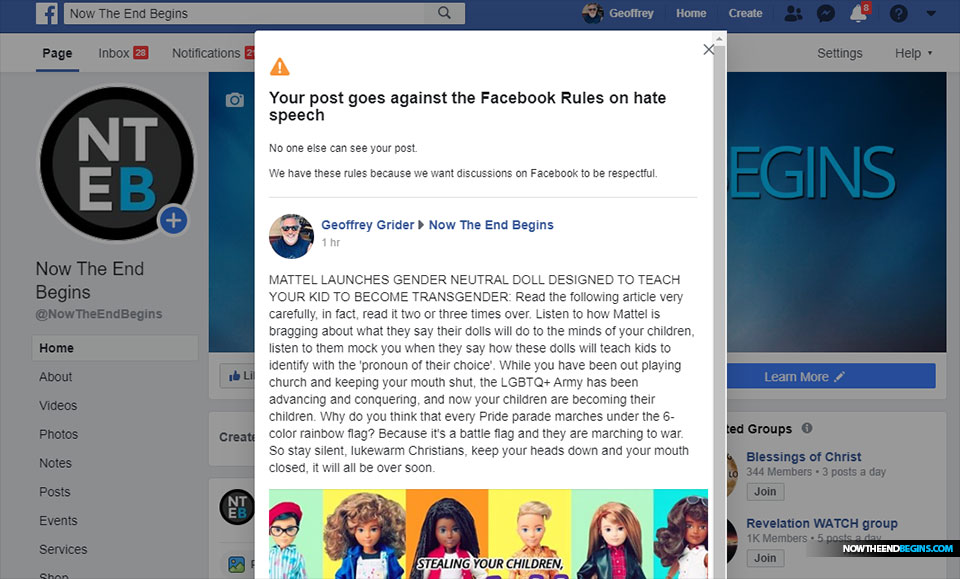 Read the following article very carefully, in fact, read it two or three times over. Listen to how Mattel is bragging about what they say their dolls will do to the minds of your children, listen to them mock you when they say how these dolls will teach kids to identify with the ‘pronoun of their choice’. While you have been out playing church and keeping your mouth shut, the LGBTQ+ Army has been advancing and conquering, and now your children are becoming their children. Why do you think  that every Pride parade marches under the 6-color rainbow flag? Because it’s a battle flag and they are marching to war. So stay silent, lukewarm Christians, keep your heads down and your mouth closed, it will all be over soon.

‘A Doll For Everyone’: Meet Mattel’s Gender-Neutral Doll

FROM TIME: A child opens a box. He starts jumping and screaming with joy—not an unusual sound in the halls of Mattel’s headquarters where researchers test new toys. But this particular toy is a doll, and it’s rare for parents to bring boys into these research groups to play with dolls. It’s rarer still for a boy to immediately attach himself to one the way Shi’a just did.

An 8-year-old who considers himself gender fluid and whose favorite color is black one week, pink the next, Shi’a sometimes plays with his younger sister’s dolls at home, but they’re “girly, princess stuff,” he says dismissively. This doll, with its prepubescent body and childish features, looks more like him, right down to the wave of bleached blond bangs. “The hair is just like mine,” Shi’a says, swinging his head in tandem with the doll’s. Then he turns to the playmate in the toy-testing room, a 7-year-old girl named Jhase, and asks, “Should I put on the girl hair?” Shi’a fits a long, blond wig on the doll’s head, and suddenly it is no longer an avatar for him but for his sister.

The doll can be a boy, a girl, neither or both, and Mattel, which calls this the world’s first gender-neutral doll, is hoping its launch on Sept. 25 redefines who gets to play with a toy traditionally deemed taboo for half the world’s kids. Carefully manicured features betray no obvious gender: the lips are not too full, the eyelashes not too long and fluttery, the jaw not too wide. There are no Barbie-like breasts or broad, Ken-like shoulders. Each doll in the Creatable World series looks like a slender 7-year-old with short hair, but each comes with a wig of long, lustrous locks and a wardrobe befitting any fashion-conscious kid: hoodies, sneakers, graphic T-shirts in soothing greens and yellows, along with tutus and camo pants.

Mattel’s first promotional spot for the $29.99 product features a series of kids who go by various pronouns—him, her, them, xem—and the slogan “A doll line designed to keep labels out and invite everyone in.”

With this overt nod to trans and nonbinary identities, the company is betting on where it thinks the country is going, even if it means alienating a substantial portion of the population.

For years, millennial parents have pushed back against “pink aisles” and “blue aisles” in toy stores in favor of gender-neutral sections, often in the name of exposing girls to the building blocks and chemistry kits that foster interest in science and math but are usually categorized as boys’ toys. Major toy sellers have listened, thanks to the millennial generation’s unrivaled size, trend-setting ability and buying power. Target eliminated gender-specific sections in 2015. The same year, Disney banished “boys” and “girls” labels from its children’s costumes, inviting girls to dress as Captain America and boys as Belle. Last year, Mattel did away with “boys” and “girls” toy divisions in favor of nongendered sections: dolls or cars, for instance.

UNDER THE BANNER OF THE RAINBOW BATTLE FLAG, GOD IS JUDGING A GODLESS AMERICA BY ALLOWING THE LGBTQ+P FOR PEDOPHILE ARMY TO TAKE CONTROL

The population of young people who identify as gender-nonbinary is growing. Though no large surveys have been done of kids younger than 10, a recent study by the Williams Institute at the University of California, Los Angeles, found that 27% of California teens identify as gender-nonconforming. And a 2018 Pew study found 35% of Gen Z-ers (born 1995 to 2015) say they personally know someone who uses gender-neutral pronouns like they and them, compared with just 16% of Gen X-ers (born 1965 to 1980). The patterns are projected to continue with Generation Alpha, born in 2010 and later. Those kids, along with boys who want to play with dolls and girls who identify as “tomboys” and don’t gravitate toward fashion doll play, are an untapped demographic. Mattel currently has 19% market share in the $8 billion doll industry; gaining just 1 more point could translate into $80 million in revenue for the company.

Mattel sees an even broader potential for Creatable World beyond gender-creative kids. In testing, the company found that Generation Alpha children chafed at labels and mandates no matter their gender identity: They didn’t want to be told whom a toy was designed for or how to play with it. They were delighted with a doll that had no name and could transform and adapt according to their whims. READ MORE

A Doll For Everyone’: Meet Mattel’s Gender-Neutral Doll

Just like the pedophile that lures your child into their car with candy, Mattel is luring your children with these dolls so they can explore their ‘gender fluidity’. Women with no femininity, men with no manliness or strength, welcome to the end times religion of Antichrist.