The paper, which analyzes decades of peer-reviewed science, reports that low magnesium levels—not cholesterol or saturated fat—is the leading predictor of heart disease. The paper argues that medical research took “an early wrong turn” by ignoring studies dating back to 1957 showing that lack of this essential mineral may actually cause plaque buildup in arteries.

Up to 80 percent of Americans are jeopardizing their health by failing to get the recommended daily allowance (RDA) of a mineral that protects against heart disease, diabetes, osteoporosis, stroke, and other dangerous disorders. In fact, this essential nutrient—required by every cell in your body—is so often overlooked that it’s been dubbed “the forgotten mineral.”

Skimping on this crucial mineral—magnesium—could actually be fatal, a new study suggests. The researchers checked the magnesium levels of 7,664 initially healthy people (using urine tests), then tracked the participants for an average of 10.5 years. Those with the lowest urinary levels of magnesium were 70 percent more likely to die from heart disease, compared to people with higher levels, even after other cardiovascular threats were taken into consideration. 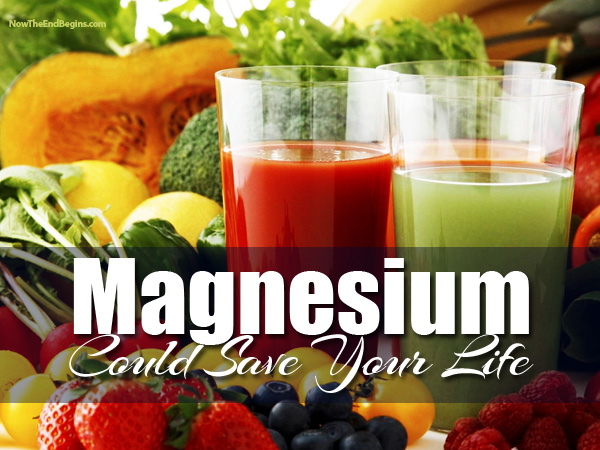 Freshly-made fruit and vegetable juices are the best and most-easily assimilated forms of the wonder mineral magnesium!

The researchers report that low magnesium levels are an independent risk factor for heart disease, while a diet that’s rich in this vital mineral may be protective.

Yet most of us eat a dangerously unbalanced diet that’s too high in calcium and too low in magnesium, a combination that may actually boost risk for heart attacks and strokes, according to another new paper.

The paper, which analyzes decades of peer-reviewed science, reports that low magnesium levels—not cholesterol or saturated fat—is the leading predictor of heart disease.  The paper argues that medical research took “an early wrong turn” by ignoring studies dating back to 1957 showing that lack of this essential mineral may actually cause plaque buildup in arteries.

“This means we have been chasing our tails all of these years going after cholesterol and the high saturated-fat diet, when the true culprit was and still is low magnesium,” study author Andrea Rosanoff, Ph.D., Director of Research & Science Information Outreach Center for Magnesium Education & Research, in Pahoa, Hawaii, contends in a statement.

“It should be obvious that cholesterol isn’t the cause, since heart disease remains the leading killer of Americans, despite two decades of statin use,” adds Carolyn Dean, MD, ND, author of The Magnesium Miracle (Ballantine Books). Indeed, a 2009 study of more than 136,000 people hospitalized for heart attacks found that nearly 75 percent of had LDL (bad) cholesterol levels considered normal under national guidelines, and close to half had “optimal” levels.

“Magnesium deficiency is the missing puzzle piece that explains why people with normal or optimal cholesterol—as well as those being treated with drugs to lower cholesterol—suffer heart attacks and strokes,” reports Dr. Dean.

“Not only is there very solid scientific evidence that magnesium helps prevent heart attacks, but there is also research showing that if one occurs, immediate treatment with magnesium can actually stop cell death and save lives,” Dr. Dean adds.

In a randomized study of 194 heart-attack patients, those treated with IV magnesium had one-fourth the in-hospital death rate compared to those who received a placebo, and also had lower rates of irregular heartbeats and congestive heart failure.  A follow-up study by the same researchers also found that five years later, nearly twice as many in the placebo group had died from heart disease or other causes and those who survive had higher rates of impaired heart function.

Potential health benefits of magnesium include:

How much magnesium do you need?

Foods that are rich in magnesium include leafy green vegetables like spinach and beans, fruits like bananas and apricots, peas, nuts, seeds, whole grains, soy products, and some types of mineral water.

It is extremely common for Americans to have low levels of magnesium because most don’t eat the recommended amount of fruits and vegetables. These foods are also lower in the mineral than was the typical in the past, since today’s produce is often grown in magnesium-depleted soil.

What are the warning signs of deficiency?

Because these symptoms can overlap with those of other conditions, if you think you might be deficient, consult a healthcare provider, who can order tests to check your levels. Also talk to your provider before taking magnesium supplements, which can interact with certain medications.

I personally take 400mg of Magnesium Asporotate from Solaray brands.