THE PURGE COMETH: First Facebook Predictably Banned Louis Farrakhan To Fool You, Then Came For Their Real Target – Conservatives And Christians

The social media giant Facebook announced the permanent suspension of the “dangerous individuals” for violating the company’s policies on hate speech and promoting violence. “We’ve always banned individuals or organisations that promote or engage in violence and hate, regardless of ideology,” a Facebook spokesperson said. “The process for evaluating potential violators is extensive and it is what led us to our decision to remove these accounts today.”Following his deletion, Paul Joseph Watson said: “Hopefully, the Trump administration will now take the issue of social media censorship seriously. They’re now just banning people for wrong think.

Facebook snapped their fingers today, and just like that, purged their platform of political and social commentators Paul Joseph Watson, Laura Loomer, and Milo Yiannopoulos among others. Now they’re coming for Christians.

As I was doing research for this story, something curious began to emerge glaringly from the social landscape. Last week, when Facebook started purging accounts it deems unworthy, I was unable to find any Liberal sites or blogs that had been banned. Sure, the banning of Louis Farrakhan the purveyor of actual hate speech long overdue made headlines, and the banning of extremist sites calling for racial violence is a good thing. But outside of those types of accounts, the only other people being banned are Conservatives preaching freedom and Christians preaching Jesus Christ.

“And when they bring you unto the synagogues, and unto magistrates, and powers, take ye no thought how or what thing ye shall answer, or what ye shall say: For the Holy Ghost shall teach you in the same hour what ye ought to say.” Luke 12:11,12 (KJV)

So just for fun, I thought I would do a quick Facebook search to see if Liberal hate groups were still active. Sure enough, I searched and found the Liberal hate groups like ANTIFA, the Muslim Brotherhood, the racial hate promoting Black Lives Matter, New World Liberation Front, a self-explanatory group called the Communists, Anarchists and Socialists United Front, the Jew-hating Nation of Islam, and believe it not, a group with 19,000 members and created by the Islamic terror group Hamas, the list went on ad infinitum. Seems like Facebook is getting really, really, really selective with who they consider to be the ‘hate speech’ people. And they all seem to be Conservatives or Christians.

Facebook took their sliminess up a notch or two in the banning of Alex Jones. After they kicked him off, they went a step further and said that if anyone dared to post articles from InfoWars, that the offending person would be banned as well. It’s getting so bad that I can’t drive past my local library here in St. Augustine without picturing Mark Zuckerberg standing in the parking lot with mountains of books that he’s dousing with gasoline as he prepares to set them on fire.

Facebook is not simply a website, or just silly social media, with over 2.7 billion people on their platforms, Facebook has become the marketplace of the world. The bible tells us that in the last days darkness will rise as the Antichrist takes the stage in the time immediately after the Pretribulation Rapture of the Church. Everything will be part of the One World global system from which there will be no dissent or debate. As Facebook joins the gathering darkness, this is what they’ve become. Dissention and individual thought will not be tolerated in the social society.

“All have sinned”: Facebook removes Christian sermon and suspends individual who shared it, “You posted hate speech”

FROM THE CALDRON POOL:  The social media giant Facebook announced the permanent suspension of the “dangerous individuals” for violating the company’s policies on hate speech and promoting violence. “We’ve always banned individuals or organisations that promote or engage in violence and hate, regardless of ideology,” a Facebook spokesperson said. “The process for evaluating potential violators is extensive and it is what led us to our decision to remove these accounts today.”

“There’s no pretence of enforcing rules. If you challenge them, you’re gone,” he added.

Is this the sort of thing we need as a society? You may not agree with or appreciate the banned individuals, but are we so intellectually anemic that we need a social media giant to tell us what opinions we should and should not listen to?

We published this story last week and it resulted in the below-mentioned violation as well as a ban on me personally for posting to groups that I am not and admin in. I have to maintain multiple Facebook accounts because one of them is always banned at nearly all times. 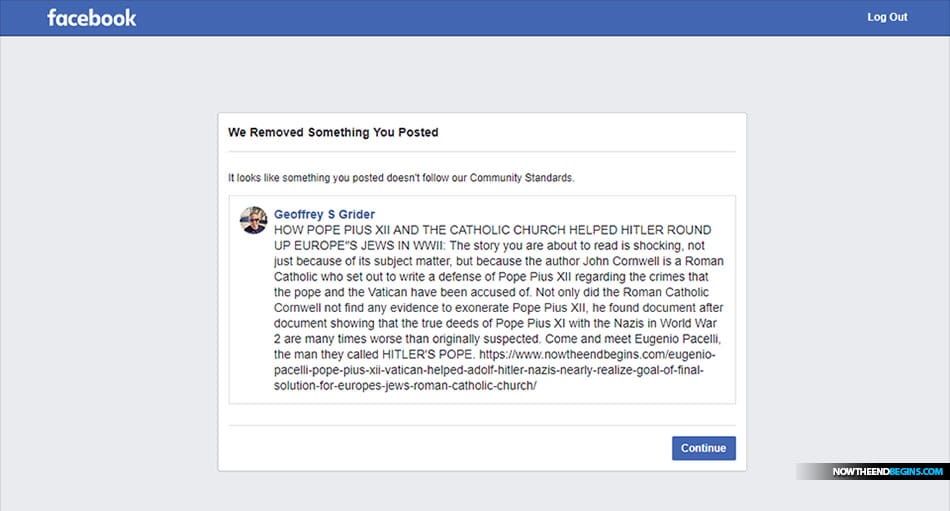 Last year, Brendan O’Neill spoke about the incredibly corrosive and infantilising impact censorship has on society. Speaking with Spiked Magazine, O’Neill warned: “Censorship treats us as children who have to have our ears and eyes covered by gracious people in positions of authority so that we never hear things that they’ve decided on our behalf are wrong or incorrect or offensive.

“Everyone is reduced to the level of a child and as a consequence, your moral and mental muscles get weaker and weaker because they’re never called into use,” O’Neill said.

Perhaps more concerning than that is the issue George Washington is said to have raised when he warned that censorship could lead to our own demise. “If the freedom of speech is taken away then dumb and silent we may be led, like sheep to the slaughter.”

Other conservatives have called on the Trump administration to act, warning the social media giants are silencing the Presidents most effective political voices and allies just 18 months before the 2020 election.

We’ve said it before and we’ll say it again. Hate-speech was invented to create the illusion of virtue in shutting down and censoring unapproved speech and opinion. Branding criticisms and critiques of particular ideologies or certain policies as “hate speech” provides a way of silencing your political opponent while claiming the moral high ground in doing so.

Facebook has removed a link to a sermon and temporarily suspended the individual who shared it because, apparently, some Christian doctrines violate the platform’s community standards on “hate speech.” The 9-minute clip was taken from a message delivered by missionary and evangelist Paul Washer in which he detailed the biblical doctrine known as Total Depravity. The doctrine of Total Depravity deals with the state of humanity after sin entered the world (Gen. 3), and how every part of man — his mind, will, emotions, and flesh — have been corrupted by sin. READ MORE