From childhood up, my “protestant popes” were false teachers like Creflo Dollar, T.D. Jakes, and Eddie Long. As far as “christian” music goes, all I knew were worldly “gospel” musicians such as Kirk Franklin, Mary & Mary, and Donnie McKirkland. One of the cardinal rules in all the charismatic churches I’ve experienced, is that under no circumstance are you allowed to SPEAK AGAINST or CHALLENGE what the pastor says or does from the pulpit. Whether it’s scriptural or not. 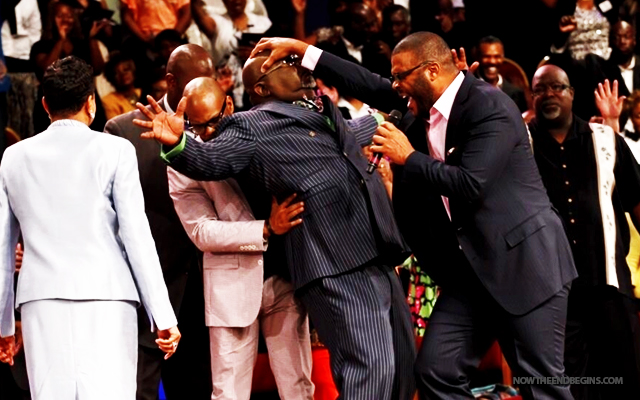 THE BIBLICAL DEFINITION OF BLASPHEMY OF THE HOLY GHOST

I’ll be doing an article soon on my personal testimony in the Lord. But for the purposes of this article, allow me to go ahead and state that several years ago the Lord delivered me and my family from the Charismatic cult.

From childhood up, my “protestant popes” were false teachers like Creflo Dollar, T.D. Jakes, and Eddie Long. As far as “christian” music goes, all I knew were worldly “gospel” musicians such as Kirk Franklin, Mary & Mary, and Donnie McKirkland.

I was taught and stood for all the charismatic heresies including tongues, healing oil, holy water, baptismal regeneration, etc. The charismatic cult (as well as all other cults) thrives on those completely ignorant of scripture. They know that one of the keys to keeping people out of the Bible and hesitant about searching the scriptures for themselves (John 5:39 KJV), is to keep them in bondage. This goal is accomplished by getting people to believe that understanding the Bible really doesn’t matter, is too difficult to understand, filled with so many errors that you can only trust what a man says about it, is to be privately interpreted, or that God’s truth is only contained in the ORIGINAL Greek and Hebrew which no one possesses today. The end game to this is what I refer to as “protestant popes”, where salvation is ultimately determined on what the pastor thinks or feels about the person. If you tithe well, the pastor says you’re saved. If you don’t tithe, the pastor says you’re lost. If you become a member of the church, the pastor says you’re saved. If you denounce your membership, the pastor says you’re lost. If you jump up and down, pass out, shake uncontrollably, or speak in tongues during the jungle music ‘gospel” rock show, you’re saved; If you don’t, you’d better checkup. So on and so forth.

One of the cardinal rules in all the charismatic churches I’ve experienced, is that under no circumstance are you allowed to SPEAK AGAINST or CHALLENGE what the pastor says or does from the pulpit. Whether it’s scriptural or not. I’ve heard pastors openly proclaim suicide as an unpardonable sin from the pulpit. I’ve seen pastors break out in the “holy ghost shuffle” while speaking in tongues from the pulpit. Questioning such foolish gestures were labeled as one committing the UNPARDONABLE SIN of BLASPHEMY AGAINST THE HOLY GHOST. Therefore, no ever would or could open their mouths against it. WE DID NOT KNOW THE BIBLE.

So what exactly is the Biblical definition of Blasphemy against the Holy Ghost? Over the past few weeks, I’ve read comments after comments of people rejecting the Biblical doctrine of eternal security by quoting this unpardonable sin, but NO ONE ever gave definition as to exactly what this sin was. Is it saying something negative about someone speaking in tongues?? Is it criticizing “faith healers” such as Benny Hen and the rest of the circus clowns? Is it unbelief? Is it falling away from the faith? What does it mean?

“And the scribes which came down from Jerusalem said, He hath Beelzebub, and by the prince of the devils casteth he out devils. And he called them unto him, and said unto them in parables, How can Satan cast out Satan? And if a kingdom be divided against itself, that kingdom cannot stand. And if a house be divided against itself, that house cannot stand. And if Satan rise up against himself, and be divided, he cannot stand, but hath an end. No man can enter into a strong man’s house, and spoil his goods, except he will first bind the strong man; and then he will spoil his house. Verily I say unto you, All sins shall be forgiven unto the sons of men, and blasphemies wherewith soever they shall blaspheme: But he that shall blaspheme against the Holy Ghost hath never forgiveness, but is in danger of eternal damnation: Because they said, He hath an unclean spirit.” Mark 3:22-30 (KJV)

Notice how the Holy Ghost specifically capitalized the (H) in “He”. That “He” is Jesus! That’s who the scribes are LITERALLY pointing at. The comforter hasn’t even come yet (John 16:7 /Acts 19:1-2 KJV).

“But when the Pharisees heard it, they said, This fellow doth not cast out devils, but by Beelzebub the prince of the devils. And Jesus knew their thoughts, and said unto them, Every kingdom divided against itself is brought to desolation; and every city or house divided against itself shall not stand: And if Satan cast out Satan, he is divided against himself; how shall then his kingdom stand? And if I by Beelzebub cast out devils, by whom do your children cast them out? therefore they shall be your judges. But if I cast out devils by the Spirit of God, then the kingdom of God is come unto you. Or else how can one enter into a strong man’s house, and spoil his goods, except he first bind the strong man? and then he will spoil his house. He that is not with me is against me; and he that gathereth not with me scattereth abroad. Wherefore I say unto you, All manner of sin and blasphemy shall be forgiven unto men: but the blasphemy against the Holy Ghost shall not be forgiven unto men. And whosoever speaketh a word against the Son of man, it shall be forgiven him: but whosoever speaketh against the Holy Ghost, it shall not be forgiven him, neither in this world, neither in the world to come.”  Matthew 12:24-32 (KJV)

Including what we’ve learned from Mark, we see the Lord Jesus Christ specifically state that it is by the Spirit of God whereby he cast out devils and not Beelzebub, and such sin would not be forgiven in this world, neither the world to come. Now what is the world to come? The world to come is the regeneration of the earth, during Christ’s 1000 year Millennial Reign when he LITERALLY reigns ON EARTH from Jerusalem (Matthew 19:28 KJV).

How can we check and verify that this definition is correct?

“And when the day of Pentecost was fully come, they were all with one accord in one place.  And suddenly there came a sound from heaven as of a rushing mighty wind, and it filled all the house where they were sitting. And there appeared unto them cloven tongues like as of fire, and it sat upon each of them.  And they were all filled with the Holy Ghost, and began to speak with other tongues, as the Spirit gave them utterance. And there were dwelling at Jerusalem Jews, devout men, out of every nation under heaven. Now when this was noised abroad, the multitude came together, and were confounded, because that every man heard them speak in his own language. And they were all amazed and marvelled, saying one to another, Behold, are not all these which speak Galilaeans? And how hear we every man in our own tongue, wherein we were born? Parthians, and Medes, and Elamites, and the dwellers in Mesopotamia, and in Judaea, and Cappadocia, in Pontus, and Asia, Phrygia, and Pamphylia, in Egypt, and in the parts of Libya about Cyrene, and strangers of Rome, Jews and proselytes, Cretes and Arabians, we do hear them speak in our tongues the wonderful works of God. And they were all amazed, and were in doubt, saying one to another What meaneth this? Others MOCKING said, These men are full of new wine. 14 But Peter, standing up with the eleven, lifted up his voice, and said unto them, Ye men of Judaea, and all ye that dwell at Jerusalem, be this known unto you, and hearken to my words: For these are not drunken, as ye suppose, seeing it is but the third hour of the day. But this is that which was spoken by the prophet Joel;” Acts 2:1-16 (KJV)

Here, you have people MOCKING as the Apostles speak in tongues (which are literal languages), and not once does Peter even make mention of them committing the unpardonable sin of blasphemy against the Holy Ghost!

“Then Simon himself believed also: and when he was baptized, he continued with Philip, and wondered, beholding the miracles and signs which were done.  Now when the apostles which were at Jerusalem heard that Samaria had received the word of God, they sent unto them Peter and John: Who, when they were come down, prayed for them, that they might receive the Holy Ghost: (For as yet he was fallen upon none of them: only they were baptized in the name of the Lord Jesus.) Then laid they their hands on them, and they received the Holy Ghost. And when Simon saw that through laying on of the apostles’ hands the Holy Ghost was given, he offered them money, Saying, Give me also this power, that on whomsoever I lay hands, he may receive the Holy Ghost. But Peter said unto him, Thy money perish with thee, because thou hast thought that the gift of God may be purchased with money. Thou hast neither part nor lot in this matter: for thy heart is not right in the sight of God. REPENT therefore of this thy wickedness, and pray God, if perhaps the thought of thine heart may be forgiven thee.” Act 8:13-22 (KJV)

Here Simon attempts make merchandise of the Holy Ghost for carnal gain, and not once does Peter even make mention of Simon committing the unpardonable sin of blasphemy against the Holy Ghost! Yet and still, Peter still gives Simon the option to REPENT.

The unpardonable sin of blasphemy against the Holy Ghost has NOTHING to do with mocking “tongue speakers” or “faith healers” or anything of that nature. It’s LITERALLY accusing the Lord Jesus Christ ON EARH of being possessed with an unclean spirit. Anyone who states otherwise is simply trying to put people under bondage. If you’re saved, you’ve been set free!

“If the Son therefore shall make you free, ye shall be free indeed.” John 8:36 (KJV)

Jimmy Randolph is a veteran, husband, father, Bible believer and a devoted student of the word of God. He was called to preach on the street in 2012, and maintains a strong, personal tract witness for the Lord Jesus Christ.