Texas Ranger Drops Jade Helm Bombshell: “There Are Trains With Shackles On Them”

According to the law enforcement insider there are trains moving throughout Texas and some of them have been outfitted with shackles, presumably to “transport prisoners of some sort.” Jade... 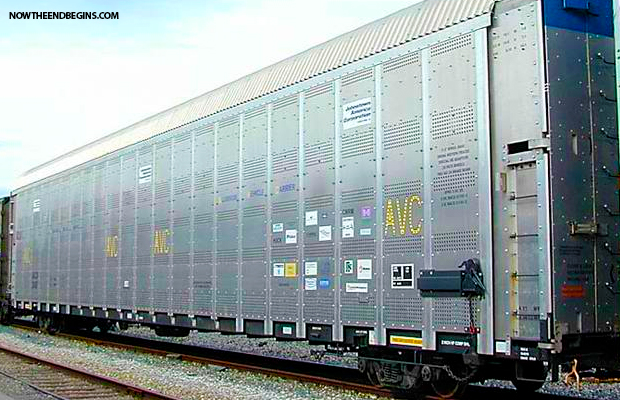 The reports about the coming Jade Helm 15 operation across the southwest continue to suggest that this is not merely a standard training exercise to prepare our military personnel for foreign engagements as has been suggested by officials.

“But when they shall lead you, and deliver you up, take no thought beforehand what ye shall speak, neither do ye premeditate: but whatsoever shall be given you in that hour, that speak ye: for it is not ye that speak, but the Holy Ghost.” Mark 13:11 (KJV)

A letter sent to Dave Hodges at The Common Sense Show by a concerned Texas Ranger indicates that the government is preparing for a scenario similar to what has been described in William Forstchen’s recent novella Day of Wrath in which ISIS terrorists cross the southern border of the United States and simultaneously attack soft targets across the nation.

But the letter doesn’t stop there. The Ranger, who has kept his identify private for obvious reasons and makes clear that the scope of Jade Helm is so secret that the intent is not completely clear, says that the JH15 mission objectives may go much farther than just preparing for terrorists. According to the law enforcement insider there are trains moving throughout Texas and some of them have been outfitted with shackles, presumably to “transport prisoners of some sort.” The claim adds further credence to a report about Jade Helm dissident roundups and arrests and widespread martial law declarations following an emergency.

His letter sheds some light on the Walmart store closings, suggesting at least one may be utilized in a national security capacity as a staging point for the Department of Homeland Security, an agency that is apparently not trusted by anyone within the Texas Rangers organization, according to the source.

I have been a Texas Ranger for quite some time, and as such, I am privy to much of what is going on with regard to the Midland Walmart store closing, the presence of ISIS on Texas soil and our preparations to combat an insurgent threat.

I will not give you my rank or location because it would not be safe to do so. It is a waste of time to try and trace the IP#, etc., as I have taken steps to ensure that this note cannot be traced back to me.  I understand and  realize that you seem to have a growing issue with people who will not go on the record with their inside knowledge or first-hand observations, but you cannot understand the pressure and scrutiny that some of us are under. I am taking a big risk writing this email to you.

The main reason that I am writing to you is to encourage you to keep writing on the growing threat of infiltration in Texas and I suspect other states as well. The infiltration I am writing about is not just Special Forces that are going to conducting covert drills in our state. that is concerning and I agree with you this involves martial law.  For now I am talking about ISIS and the danger that they pose to all of us. Our intelligence indicates that they have enough manpower & firepower to subdue a small town. The Midland Walmart takeover by DHS is a national security move in which we have been told falls under the Continuity of Government provisions. The Threat Fusion Centers are providing related information on what it is we are facing but the information sharing is only in one direction and that is very concerning.

We expecting an attack on more than one Texas city or town by ISIS and/or any of their partners. I believe the information to be accurate. However, this makes the covert operations of groups like the Navy Seals and others under JH15 highly suspicious. We do not need the insertion of Special Ops into Texas towns and cities. I think that you are probably right about the intention of arresting political undesirables given what we know about JH15. I am of the opinion that whatever the mission objectives of JH15, they have nothing to do with the immediate threat. Therefore, I do not pretend to understand the full scope of JH 15 because there are unfolding operational details which are almost impossible to reconcile with what I already know to be fact based the evidence for what is going on.

Let me drop a bombshell that I have not seen you address. There are trains moving throughout Texas that have shackles inside some of the cars. I have not personally seen them, but I know personnel that have seen this. This indicates that these trains will be used to transport prisoners of some sort. I know from reading your articles that your default belief will be that these are for American political prisoners and will be transported to FEMA detention camps of some sort. We have been told by Homeland that these trains are slated for transporting captured terrorists, non-domestic. We are not sure we can trust this explanation because Homeland is keeping a lot from us and we are growing increasingly uncomfortable with their presence in Texas.

I wanted to tell also you that we believe that Pantex is a high value target for ISIS and much or our preparation is to thwart any action by terrorists against the facility.  I am wondering how in the hell you figured that out. Someone on the deep inside must be talking with you.

Keep writing Mr. Hodges, you and the underground media are making a difference. As I am sure you know, Colorado announced today that JH15 is suspended in that state. Unfortunately, we do not have that prerogative because we believe that we are under the threat of eminent attack here in Texas.

I do believe the ISIS threat is legitimate. But you are also correct to suspect the motives behind the JH15 drills. They are clouded in secrecy and we have been shut out regarding their operational intent. The people of Texas and all of the United States of America should be pushing back against JH15.

I will support the Feds in their preparation against ISIS. But the moment that this action turns against our locals is the moment I will perform my oath of office. I am not alone in this feeling. None of my brothers trust Homeland. We will have to see where this is going but I have a bad feeling.

The suspicions of the public are quite justified, it seems. The operational commanders for Jade Helm have compartmentalized the “exercise” to such an extent that no one, not the local and state law enforcement officers involved or the majority of military personnel, has any idea what is actually going on.

As noted in the letter, a realistic threat from our southern border certainly exists and as we’ve written previously, Border Patrol and Homeland Security have been capturing suspected terrorist operatives crossing into the United States for years. But the Texas Ranger who penned the letter says this is not necessarily the full scope of the massive Summer exercise.

And given that people within his own organization report seeing shackles in trains, is it completely out of the question to suggest that the government does, in fact, have procedures in place to detain, transport and imprison those suspected of terrorism, or those who may be suspected of being suspected?

When Gerald Celente warned of the Auschwitz Express back in a 2012 interview he wasn’t joking:

First it was the Patriot Act. Now it’s the National Defense Authorization Act. And then it was Obama’s Executive Order giving El Presidente Los Estados Unidos the supreme right to call Martial Law at a potential threat – a potential threat.

Then there’s Big Bro over there, Attorney General Eric Holder, who just passed these guidelines that could let them listen in to what we’re saying right now, listen to you on your cell phone, watch every stroke of your keyboard, and they at the White House could then determine whether or not the algorithms add up to you being a terrorist or a potential terrorist. source