The “realistic” military training exercise, which will involve the Green Berets, Navy Seals, and the 82nd Airborne Division, is set to take place from July 15-September 15, but has... 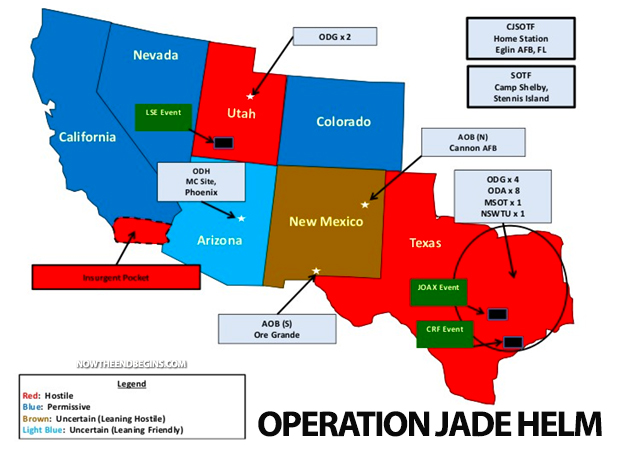 The controversial Jade Helm military exercise set to take part in nine U.S. states this summer will train US troops for small-town invasions

The “realistic” military training exercise, which will involve the Green Berets, Navy Seals, and the 82nd Airborne Division, is set to take place from July 15-September 15, but has prompted concerns after Texas and Utah were labeled “hostile” territory in documents related to the exercise.

A Houston Chronicle report reveals that soldiers will attempt to blend in with the local population in an effort to test the effectiveness of infiltration techniques. Residents will be advised to report “suspicious activity” during the exercise.

“They’re going to set up cells of people and test how well they’re able to move around without getting too noticed in the community,” said Roy Boyd, chief deputy with the Victoria County Sheriff’s Office. “They’re testing their abilities to basically blend in with the local environment and not stand out and blow their cover.”

Army Lt. Col. Mark Lastoria, a USASOC spokesman, confirmed that there is an upcoming exercise called Jade Helm 15 which is scheduled to take place this summer at locations in Texas, Arizona, New Mexico, Utah, Colorado, California and Nevada. But he denied the event is preparation for some sort of military takeover.

“That notion was proposed by a few individuals who are unfamiliar with how and why USASOC conducts training exercises,” he said in an email. “This exercise is routine training to maintain a high level of readiness for Army Special Operations Forces because they must be ready to support potential missions anywhere in the world on a moment’s notice.”