Tensions In Iran At Boiling Point As Britian, France and US Send Warships Through Strait of Hormuz

Britain, America and France delivered a pointed signal to Iran, sending six warships led by a 100,000 ton aircraft carrier through the highly sensitive waters of the Strait of... 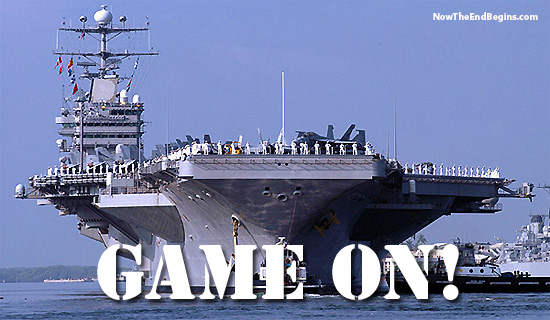 The USS Abraham Lincoln has entered the Strait of Hormuz
by Geoffrey Grider January 23, 2012
NOW THE END BEGINS SHARE:

Britain, America and France delivered a pointed signal to Iran, sending six warships led by a 100,000 ton aircraft carrier through the highly sensitive waters of the Strait of Hormuz.

From RT.com: Tensions in the Gulf could reach a breaking point as a senior Iranian official said Iran would “definitely” close the Strait of Hormuz if an EU oil embargo disrupted the export of crude oil, the semi-official Fars news agency reports.

The announcement came in response to a decision by the European Union on Monday to impose an oil embargo on Iran over the country’s alleged nuclear weapons program.  “The pressure of sanctions is designed to try and make sure that Iran takes seriously our request to come to the table,” EU foreign policy chief Catherine Ashton said.

However, with Washington’s decision to deploy a second carrier strike group in the Gulf, the EU’s attempt to pressure Iran economically could greatly increase the likelihood of all-out war in the region. source – RT.com

The Strait of Hormuz is the vital link between the Persian Gulf and the Gulf of Oman. It is also one of the most strategic chokepoints in the world when it comes to oil transit. Britain, America and France delivered a pointed signal to Iran, sending six warships led by a 100,000 ton aircraft carrier through the highly sensitive waters of the Strait of Hormuz.

The USS Abraham Lincoln has entered the Strait of Hormuz

From Telegraph UK: This deployment defied explicit Iranian threats to close the waterway. It coincided with an escalation in the West’s confrontation with Iran over the country’s nuclear ambitions.

European Union foreign ministers are today expected to announce an embargo on Iranian oil exports, amounting to the most significant package of sanctions yet agreed. They are also likely to impose a partial freeze on assets held by the Iranian Central Bank in the EU.

Tehran has threatened to block the Strait of Hormuz in retaliation. Tankers carrying 17 million barrels of oil pass through this waterway every day, accounting for 35 per cent of the world’s seaborne crude shipments. At its narrowest point, located between Iran and Oman, the Strait is only 21 miles wide.

Last month, Admiral Habibollah Sayyari, commander of the Iranian navy, claimed that closing the Strait would be “easy,” adding: “As Iranians say, it will be easier than drinking a glass of water.”

But USS Abraham Lincoln, a nuclear-powered carrier capable of embarking 90 aircraft, passed through this channel and entered the Gulf without incident yesterday. HMS Argyll, a Type 23 frigate from the Royal Navy, was one of the escort vessels making up the carrier battle-group. A guided missile cruiser and two destroyers from the US Navy completed the flotilla, along with one warship from the French navy. source – Telegraph UK