Adolfo Nicolás, otherwise known as the Jesuit 'Black Pope', is a mystery man who almost never steps out of the murky nether-world of end times intrigue. But when US... 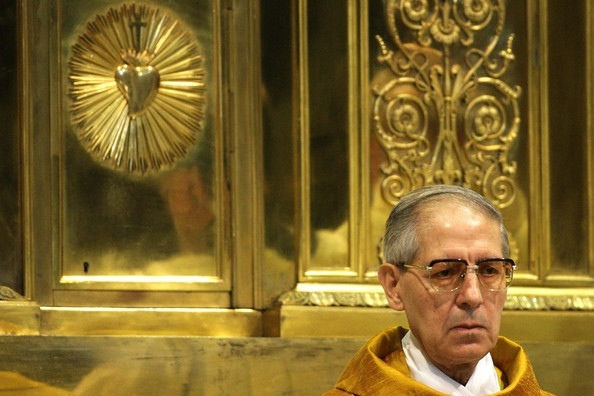 Petrus Romanus: The History of the Black Pope and the Jesuit Order

Adolfo Nicolás, otherwise known as the Jesuit ‘Black Pope’, is a mystery man who almost never steps out of the murky nether-world of end times intrigue. But when US president Barack Obama said he was going to launch a missile strike on Syria, Adolfo Nicolás spoke up. Within 24 hours, Obama had backed down.

Adolfo Nicolás, the Black Pope of the Jesuit Order

Now you know why they call the ‘Black Pope’ the most powerful man in the world.

From NCR: WASHINGTON – A U.S. military strike on Syria would be an “abuse of power” that should be “condemned and rejected,” the global leader of the Jesuit order of Catholic brothers and priests has said.

Jesuit Fr. Adolfo Nicolás, who leads the some 17,000 member order that counts among its ranks Pope Francis, adds his voice to a chorus of Catholic prelates around the world sharply criticizing the attack in an interview made public Wednesday.

“With all respect for the people of the United States, I think that a military intervention like the one being planned is itself an abuse of power,” states Nicolás in the interview. “The US has to stop acting and reacting like the big boy of the neighborhood of the world. This leads inevitably to abuse, harassment and bullying of the weaker members of the community.”

Nicolás, a native Spaniard whose superior general role in the past has been referred to as the “black pope” because of its influence around the world, also says such a military strike would question the authenticity of the United States’ Christian heritage.

Before critiquing the proposed U.S. strike in Syria, Nicolás says he does not usually make comment on political situations, but that “in the present case we are dealing with a Humanitarian situation that exceeds all the limits that would ordinarily keep me silent.”source – National Catholic Reporter