For more than 800 years, scholars have pointed to a prophecy regarding “the last pope,” and of a “great apostasy” and even the destruction of Rome. ... 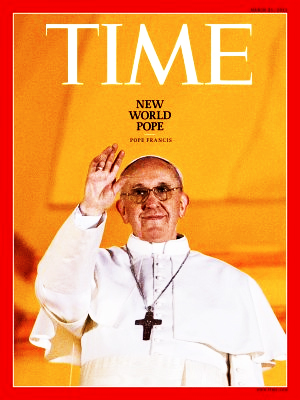 The Blood of the Saints

From TIME: Habemus Papam Franciscum came the tweet, the first official word from the @Pontifex account, after the white smoke curled from the copper chimney watched by hundreds of thousands in St. Peter’s Square, by millions and millions on every imaginable 21st century technology around the world. And there it was, old and new, past and present, the arrival of a Pope who for the first time hails from “the most unequal part of the world,” as he once called Latin America, who cooked his own dinners and rode the bus and took his regal name from the sainted champion of the least among us.

Jorge Mario Bergoglio, now Pope Francis, brings to the throne of St. Peter a concern about the “spiritual sickness” that can afflict a church if it seems to care more for its priests than its people. “I want you to bless me,” he told the crowd, before it was his turn to bless them. He noted that his brother Cardinals had gone “to the end of the earth” to find the new Bishop of Rome.

But there was a kind of subtle, rounded—perhaps divine—justice to it all. And by the time his brief debut was over, it was already clear that a profound change had occurred in an institution famously resistant to it.

He will deliver much-needed oxygen to parts of the Catholic empire. Just before the conclave convened, he celebrated his 55th year as a member of the Society of Jesus—popularly called the Jesuits.

That itself is a matter of rejoicing for the order—even though Bergoglio is on the conservative end of the often liberal Jesuit scale. The order has seen its once formidable influence wane as the star of Opus Dei rose during the reign of John Paul II. Bergoglio’s choice of name is also telling.

Many people immediately saw the reference to the great saint of the church, Francis of Assisi. But anyone raised by the Jesuits would have heard the resonance of another great saint and member of the Society of Jesus: the evangelist to Asia, Francis Xavier. In Mexico City, stunned Jesuits simply murmured “the Argentine” at the news, with one older priest saying, “Our first Pope—let us pray for him and for our church.” source – TIME

For more than 800 years, scholars have pointed to a prophecy regarding “the last pope,” and of a “great apostasy” and even the destruction of Rome. Taken from St. Malachy’s “Prophecy of the Popes,” it includes a list of verses predicting each of the Roman Catholic popes from Pope Celestine II to the final pope, “Peter the Roman,” whose reign would end in the destruction of Rome.

The prophecies, first published in 1595, were attributed to St. Malachy by Benedictine historian Arnold de Wyon, who recorded them in his book “Lignum Vitæ.” Tradition holds that Malachy had been called to Rome by Pope Innocent II. While there, he experienced a vision of the future popes, including the last one, which he wrote down in a series of cryptic phrases.

According to the prophecy, the next pope is to be the final pontiff, Petrus Romanus or Peter the Roman. Some Catholics believe that the next pope on St. Malachy’s list heralds the beginning of “great apostasy” followed by “great tribulation,” setting the stage for the imminent unfolding of apocalyptic events – something many non-Catholics would agree with.

This would give rise to a false prophet, who according to the book of Revelation leads the world’s religious communities into embracing a political leader known as Antichrist. source – WND