The Israel Border Police's vaunted YAMAM counter-terrorist unit on Tuesday stormed a building in Hebron that was housing the wanted Palestinians suspected of kidnapping and murdering three yeshiva students... 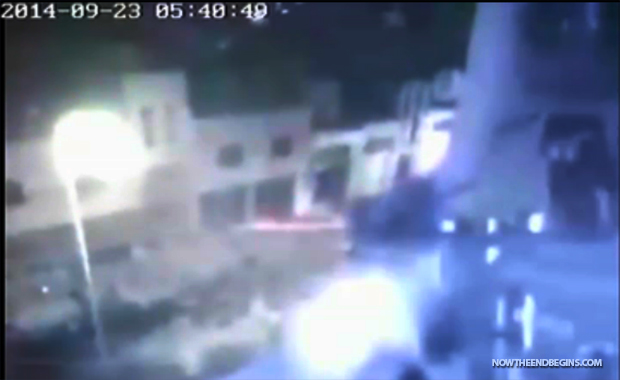 The special police counter-terrorist unit raided a building in the West Bank town of Hebron before dawn on Tuesday.

“Ascribe ye strength unto God: his excellency is over Israel, and his strength is in the clouds.” Psalms 68:34

America needs a leader like Benjamin Netanyahu very, very badly. When the American Consulate was attacked by Muslim terrorists on 9/11/12, resulting in the death of 4 Americans, US President Barack Hussein Obama did nothing to avenge their deaths. Not unless you count giving a quickie speech and then board a plane to Las Vegas to attend yet another Democratic fundraiser as “doing something”. But things are different in Israel. Very, very different.

When 3 Jewish Yeshiva students were brutally murdered by Muslim terrorists, PM Netanyahu vowed that there would be a reckoning. True to his word, just three short months after the murders occurred, the Israeli SWAT Team found those who did the killing and eliminated them. Even took video to prove it.

The Israel Border Police’s vaunted YAMAM counter-terrorist unit on Tuesday stormed a building in Hebron that was housing the wanted Palestinians suspected of kidnapping and murdering three yeshiva students in June. In the raid, the team of crack commandos exchanged gunfire with the wanted Palestinians, killing them.

Israel had vowed to track down Marwan Kawasme and Amer Abu Aysha, the two Hamas operatives who in June abducted Gil-Ad Shaer,16, Eyal Yifrah, 19, and Naftali Fraenkel, 16, three yeshiva students who were hitchhiking near Hebron.

A massive manhunt ensued, with police and military forces combing the area near Hebron in search of the boys. After three weeks, the bodies of the youths were discovered in a field near a Palestinian village.