Riots in Wisconsin As Protesters Fill The Streets

Day of Rage. MADISON, Wis. – Police officers were dispatched Thursday to find Wisconsin state lawmakers who had apparently boycotted a vote on a sweeping bill that would strip... 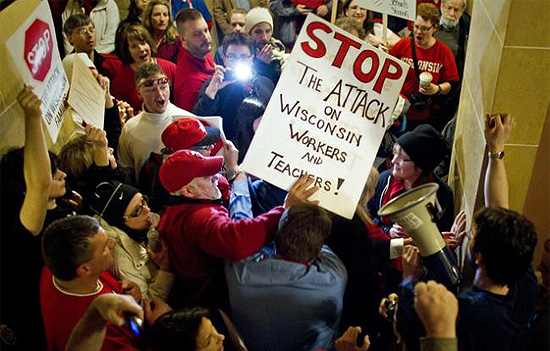 MADISON, Wis. – Police officers were dispatched Thursday to find Wisconsin state lawmakers who had apparently boycotted a vote on a sweeping bill that would strip most government workers of their collective bargaining rights.

Madison, Wisconsin is having it's very own Day Of Rage.

The lawmakers, all Democrats in the state Senate, did not show up when they were ordered to attend a midday vote on the legislation. The proposal has been the focus of intense protests at the Statehouse for three days. As Republicans tried to begin Senate business Thursday, observers in the gallery screamed “Freedom! Democracy! Unions!” Republicans hold a 19-14 majority, but they need at least one Democrat to be present before taking a vote on the bill.

“Today they checked out, and I’m not sure where they’re at,” Republican Senate Majority Leader Scott Fitzgerald said. “This is the ultimate shutdown, what we’re seeing today.” Democratic Minority Leader Mark Miller released a statement on behalf of all Democrats urging Gov. Scott Walker and Republicans to listen to opponents of the measure and seek a compromise. His statement did not address where Democrats were or when they planned to return.” source – Yahoo News