Palestinians Erupt In Fiery ‘Day Of Rage’ Against Israel

Palestinians seemed to be adhering to leadership calls to hold a so-called 'Day of Rage' against Israel on Friday, as hundreds of West Bank residents staged protests and clashed... 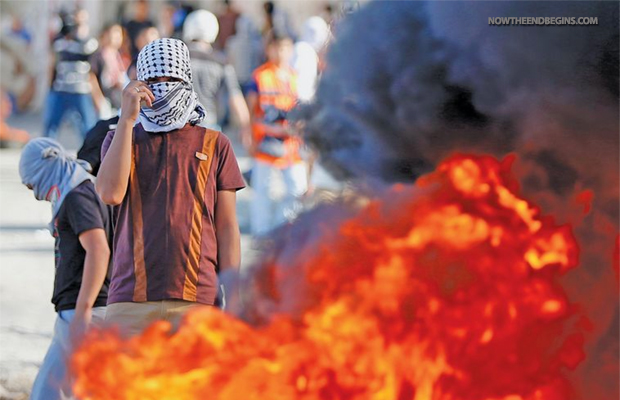 Groups call for demonstrators to step up protests against Israel in West Bank, Jerusalem and Gaza; Islamic Jihad says time has come for “popular revolution.”

Palestinians seemed to be adhering to leadership calls to hold a so-called ‘Day of Rage’ against Israel on Friday, as hundreds of West Bank residents staged protests and clashed with Israeli security forces.

Violence erupted at the flashpoint Kalandia checkpoint, located between Jerusalem and Ramallah, as some 400 Palestinians threw stones and firebombs at IDF troops. The army, in response, opened fire at the crowd, a spokeswoman said, but did not confirm a hit. Palestinians reported no injuries.

In the Shuafat refugee camp a funeral was held for 38-year-old Ibrahim al-Aqari, the east Jerusalem resident who killed two people and injured a dozen more in a terrorist attack that rattled Jerusalem this week.

Both Hamas and Islamic Jihad called on Palestinians to take to the streets on Friday in response to rising contention at the Aksa Mosque.

In the Benjamin region of the central West Bank, adjacent to Ramallah, Palestinians threw stones at security personnel, while demonstrations were held in other areas near Hebron.