LOVE HAS NO AGE: The Push To Normalize Pedophilia And Place It Under The LGBTQ+ Umbrella Increases With Child Love Snapchat Filters And Pedophile Performance Art

For Snapchat, the LGBTQ+ might also include pedophiles. In the campaign for “Love Has No Labels” held by Snapchat, one of the options wasa “Love Has No Age” filter. While this filter appears to be defunct as of June 3, conservatives on Twitter pointed out the option over the weekend of June 1-2. Twitter user Ashley St. Clair posted a video of herself with the “Love has No Age” filter. The filter had the options to say that love had no gender, race, or religion, as part of the mass-marketed Pride Month that infiltrates businesses and social media in June. But age did not seem to fit in the list, unless it was meant to justify pedophilia.

Fortune reported in 2017 that the disappearing messages that are Snapchat’s trademark make it easy for child pornographers to exploit their victims. 41 percent of underage victims were targeted through Snapchat in the year 2016. 2019 is even worse.

Ugh, I hate to do stories like this, I truly do. One main reason is because every time I write one, I am forced to remember back when I was a little kid and was sexually molested by a homosexual pedophile who was my piano teacher. But I write stories like these as first a warning to let people know what’s really going on in our world, and secondly, that in doing so some children alive now will be spared that harrowing experience.

“Then said he unto the disciples, It is impossible but that offences will come: but woe unto him, through whom they come! It were better for him that a millstone were hanged about his neck, and he cast into the sea, than that he should offend one of these little ones.” Luke 17:1,2 (KJV)

We have been telling you now for some time that the LGBTQ+ will soon be adding, officially, a “P” for pedophile under their protective banner. It hasn’t happened yet, but we are closer than you can imagine. Now, of course, they will not be using the term ‘pedophile’ because of all the stigma that it carries, and have very wisely changed it to something called ‘MAPs’, which we told you about here. The word ‘MAPs’ stands for Minor Attracted Persons, which is to say, pedophile. So with that, let’s get right to the updates.

First up on our walk of shame is the super-popular app Snapchat, which I personally found disgusting long before this new stunt, with their filters that turned your face into an animal. Man, that junk is straight out of Babylon and Egypt. Their newest filter, ‘Love Has No Age’, only lasted 2 days, but again we feel this was done purely to gauge the reactions to it. It’s gone now but guaranteed it will be back.

Snapchat Releases ‘Love Has No Age’ Filter As Trial Balloon, Then Pulls it

FROM NEWSBUSTERS: For Snapchat, the LGBTQ+ might also include pedophiles. In the campaign for “Love Has No Labels” held by Snapchat, one of the options wasa “Love Has No Age” filter. While this filter appears to be defunct as of June 3, conservatives on Twitter pointed out the option over the weekend of June 1-2. Twitter user Ashley St. Clair posted a video of herself with the “Love has No Age” filter.

The filter had the options to say that love had no gender, race, or religion, as part of the mass-marketed Pride Month that infiltrates businesses and social media in June. But age did not seem to fit in the list, unless it was meant to justify pedophilia.

Big League Politics reported that “pedophiles have made a concerted push to join the ranks of acceptance granted to the LGBT community.” In the news, children dressed as sexualized drag queens have made headlines from NBC to the Huffington Post.

Love has an age, according to the 50 states: above 16. Anything below that age is considered statutory rape, depending on the state’s conditions. Generally, if adults above a certain age are involved it will be prosecuted as such.

Snapchat is an app that is designed for teenagers. 90 percent of the company’s 190 million daily users fall between the age of 13 and 24. The company is one of the few social media platforms that sets the minimum age at 13 in compliance with the Children’s Online Privacy Protection Act (COPPA)

This filter does not match well with Snapchat, which has a reputation for enabling pedophiles on the app. Fortune reported in 2017 that the disappearing messages that are Snapchat’s trademark make it easy for child pornographers to exploit their victims. 41 percent of underage victims were targeted through Snapchat in the year 2016. READ MORE

Leaving Snapchat we take you to beautiful San Paulo Brazil, where the pedophile community there is very active as well. Here we see a pedophile engaging in an indecent and disgusting act with a 4-year old girl as an officially sanctioned exhibit at the San Paulo Museum of Art.

FROM METRO: Footage showing a four-year-old child being encouraged to touch a naked man’s body for a performance art stunt has sparked outrage in Brazil. The young girl crawls around the man at the Sao Paulo Museum of Modern Art (MAM), in Brazil, as he lies on his back surrounded by other people looking on. 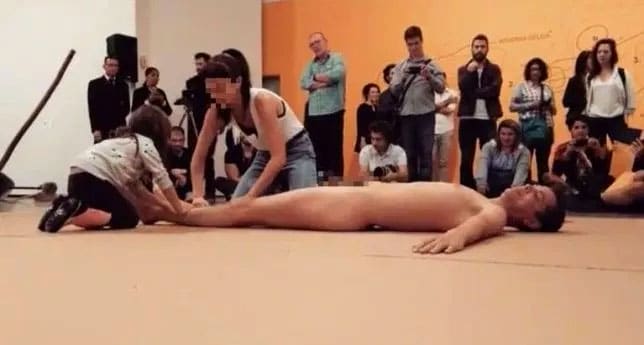 Rather than art, they are calling the show disgusting’ and a crime that ‘incites paedophilia’, the Daily Mail reports. Schwartz has taken his controversial performance across the South American country, having been initially inspired by 1960s artist Lydia Clark.

Schwartz says he becomes one of Clark’s sculptures when he performs ‘La Bete’. He said: ‘As I stand or lie naked and vulnerable I allow my audience to interact with my body by inviting them to pull, reshape and manipulate it into many different poses and to construct images using my body’. Stressing that the girl was not in danger, an MAM spokesperson said: ‘The little girl was with her mother who is also an artist. Her daughter asked to enter the show after being given an explanation as to what it contained. ‘The child wanted to participate and under her mother’s guidance and supervision she is seen on all fours going around the artist’s naked body without showing any embarrassment or aversion. READ MORE

So This Is Where We Are Right Now

Let’s see how brave and fearless you are, post this article on your social media, put it right on your Facebook page where your employer and co-workers can read it, post it to LinkedIn. Because if you can’t do that then guess what? You’re the problem. The rising tide of evil is not the problem so much it as that good men and women stay silent as they watch it rise. Which one are you?

This is an interview with the ‘husband’ of 2020 Democratic Presidential candidate Pete Buttigieg. He is asked flat out about the Snapchat ‘Love Has No Age’ campaign, and he basically refuses the answer the question. Why? Because the LGBTQ+P for Pedophile Movement absolutely, 100% believes that ‘love has no age’ because they plan on bringing the pedophiles in.

Snapchat Also Has A Gender-Bender Filter, No Surprise

Yep, Snapchat is one of the main drivers behind the LGBTQ+P for Pedophile Movement. They got people, kids mostly, hooked with “cute and harmless fun filters” where they can put hearts on their eyes and turn their face into an animal. That was the bait, and millions of children are now hooked on Snapchat. Not only did they rollout their ‘Love Has No Age’ filter, they also created one where you can see what you would look like if you “switched your gender“.