All over America, as parents go over homework with their children, it is becoming apparent that the United States public school system curriculum has been hijacked by the Pro-Muslim... 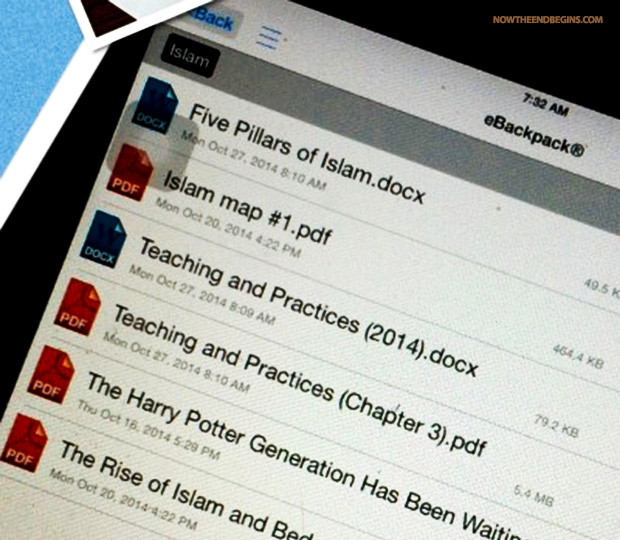 Allah in the Public School Classroom

All over America, as parents go over homework with their children, it is becoming apparent that the United States public school system curriculum has been hijacked by the Pro-Muslim Common Core platform with sickening results. Children are being forced to say the shahada, and forced to learn the Five Pillars Of Islam. When Muslims force Christians to convert, they are forced to say the shahada (the Muslim declaration of faith). The Arabic writing on the black flag of jihad (also known as the al Qaeda flag or ISIS flag) is the shahada. This chant of supremacism and imperialism is being forced on American school kids.

Does your child’s school work assignments include any of this?

Here is one mother’s story:

About a month ago my daughter asked for my help with her homework.  She is in 7th grade and usually does not ask me for help. She gave me her vocabulary words for Social Studies and simply asked me to type it for her. I started typing the first few words, and then I came to Qur’an, Mosque, Alms, Caliph, Jihad, Sunnis, Shiites. I instantly became alarmed and asked to see her Social Studies book. My husband and I spent the next 3 hours reading through her book and I have to tell you that my life changed on that day.

I kept my daughter home from school for the next two days and met with the principal. I attended my daughter’s class when she went back to school. Her assignments continued; draw detailed pictures of the 5 pillars of Islam and write a word collage of all that is good with Islam. We met with the teacher and principal together and questioned the curriculum.

We received the party line responses of “state standards” and “Common Core” for every question we had.  I was concerned with the nature of the material that was being taught in the classroom, and whether it was being presented in a truthful manner and that all aspects were told.  This was not happening.  Simply from viewing the Table of Contents one can see that Islam is the dominant religious focus throughout the book.  I was amazed upon further review of the book how they were able to slip Muslims into China, and how Spain is only referred to as Muslim Spain.  The chapter on West African Civilization contains The Growth of Islam in West Africa.  The teacher explained to me that they had discussed Christianity in the first two chapters, but when I reviewed them personally, I found that Jesus was mentioned once as a Jewish prophet in the first chapter and the second chapter briefly discussed the division within the Christian Church.  Chapter three is dedicated completely to Islam and the story of Muhammad, with multiple quotes from the Qur’an throughout the chapter. The book even goes on to say that “. . .Muhammad revealed the purest version of God’s truth” and that Muhammad is the final prophet of God’s truth with the most complete version of that truth. Read the rest of this story on Pamela Geller.com

We strongly urge all parents to go through all of your kid’s school assignments to see how much of this is present in their lessons. And if it is, start making phone calls, start writing letters, start pushing back the creeping sharia that our government seems intent on forcing on us. Because when that window closes, there will be no going back.

America needs you, how will you respond?