Public School students in multiple states are being forced to recite 'Allah is the only god' as part of the classroom assignment. American Center for Law and Justice is... 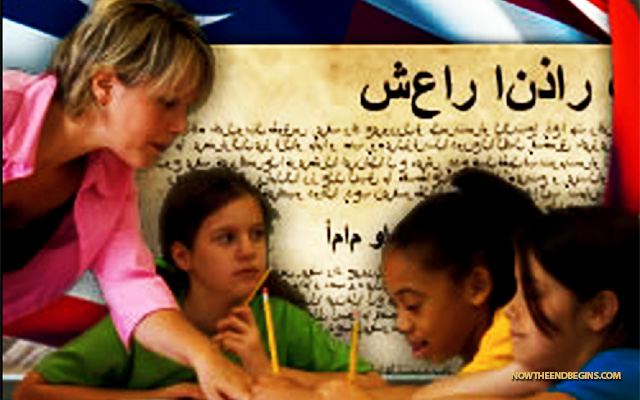 Public School students forced to recite ‘Allah is the only god’

Amid a new report of Islamic indoctrination in public schools, the American Center for Law and Justice is fighting back with a petition drive that already has garnered 120,000 signatures. Earlier this year, public-school students in Madison, Wisconsin, were given an assignment to “pretend you are Muslim,” while students in Florida were instructed to “recite the Five Pillars of Islam as a prayer, make Islamic prayer rugs and perform other Muslim rituals,” ACLJ said Monday.

Nearly 120,000 people have signed ACLJ’s petition demanding a halt to such teaching. “What if your child or grandchild’s public school forced them to write out the Shahada – the Islamic conversion creed – while having skipped Christianity?” the organization asked.

Now, parents of public-school students in Tennessee are protesting assignments that include writing a declaration that Allah is supreme and textbooks that recount Islamic doctrines as facts instead of beliefs.

“What if your child’s study guide had a section called ‘Origins of Islam’ that included statements such as, ‘Around the age of 40, the angel Gabriel told Muhammad that he was to be a prophet of Allah.’ “Stated as fact, not belief,” the ACLJ said.

But the school skipped the textbook’s section on Christianity.

School officials explained, she told the Herald, that Christianity was not part of the state’s standards, so it wasn’t covered.

“I have a big problem with that. From a historical point of view, that’s a lot of history these kids are missing,” Porterfield told the newspaper. “Also, for them to spend three weeks on Islam after having skipped Christianity, it seems to be that they are making a choice about which religion to discuss.”

She said her concerns were about her seventh-grade daughter being taught the “Shahada,” the profession of Islamic faith.

“From a religion point of view, if the schools are going to be teaching religion in history, they need to teach them all equally,” she said. The ACLJ reported called it “Islamic indoctrination right here in our schools.”

The organization said Maury County school officials admitted they were addressing “some sensitive topics” in class and there appeared to be some “confusion.”

“That’s outrageous,” ACLJ said. “The indoctrination of students with the precepts of converting to Islam and forcing them to recite ‘Allah is the only god’ aren’t ‘sensitive topics’; it’s unconstitutional.

“Imagine the outcry from the ACLU, Freedom From Religion Foundation (FFRF), and other leftist and angry atheist organizations if a study guide states, ‘Jesus is the Son of God,’ and forced children to recite the Lord’s Prayer.”

“We’re in direct contact with a number of parents and concerned citizens, we’re taking on new clients, and preparing critical demand letters and open records requests to these schools and school districts,” the group said.

“It is a clear constitutional principle that public education may not indoctrinate young minds into a religion. Teachers and schools may teach what different faith traditions believe and how that has affected world history and geography. But a school cannot censor Christianity and promote Islam.”

The Daily Herald reported Jan Hanvey, a middle school supervisor for Maury County Public Schools, said the curriculum has covered the subject for decades, and Buddhism and Hinuism also are covered.

She told the newspaper the chapter on Christianity was not skipped but was being delayed.

The newspaper cited state advisories that called for seventh-grade social studies to begin with the Islamic world and then move to Africa. The “Age of Exploration” follows, which continues into eighth grade.

Hanvey told the newspaper Christianity is discussed in the “Age of Exploration,” partly because religious persecution is one of the reasons for a search for a new world.

Fox News reported Maury County Director of Schools Chris Marczak said his teachers “work together to make sure that our students are learning what is expected through the Tennessee academic standards.”

“For this last section on the Islamic World this past week, our educators had students complete an assignment that had an emphasis on Islamic faith,” he said. “The assignment covered some sensitive topics that are of importance to Islamic religion and caused some confusion around whether we are asking students to believe in or simply understand the religion.”

WND reported earlier this year teachers and administrators at a Pennsylvania school district attended a training session on Islam and Arabic culture at taxpayer expense.

The workshop in the town of Lebanon was led by a former district Arabic translator, Mohamed Omar, who took time off from his Department of Human Services job in Philadelphia “to share his knowledge of Islam with the staff,” the Lebanon Daily News reported.

“I think this is the first time ever in the United States that a school district goes to a mosque,” mosque founder Hamid Housni told the Daily News. “Usually a representative of a mosque goes somewhere. We don’t have words to explain to you how we appreciate that. This is very, very special.”

In 2006, WND reported students in Nyssa, Oregon, were learning Muslim prayers and dressing as Muslims.

Another assignment was to learn the Five Pillars of Islam, study the Muslim holiday of Ramadan and listen to guest speakers, including an American Muslim who came dressed in her religious costume to talk about her Quran.

A resulting lawsuit regarding the curriculum was similar to a previous case in which the 9th U.S. Circuit Court of Appeals eventually ruled such indoctrination was permissible as “cultural education.” source