The Storm Lake Times reported in November that Joseph Matthew Smith, 23, a former Midwest Christian Services (MCS) student, convicted of as many as 15 sex crimes against victims whose ages ranged from 1 to 13 years, was sentenced to prison in December 2015. On January 16, the Times reported a spokesman from the Iowa attorney general’s office said they are “no longer seeking” Smith’s commitment because “an offender’s hormone levels are an important part of substantiating an offender’s likelihood of recidivism.” “We don’t believe we have evidence sufficient to prove Josie Smith has a significant chance of reoffending,” spokesman Lynn Hicks said.

A convicted child rapist is reportedly to be released from prison in Iowa because he is no longer deemed a threat since he began transgender hormone treatments and is considering gender reassignment surgery.

This is where the LGBTQ+P for Pedophile Movement is taking our nation, right down the toilet, and if Christians don’t stand up now and reject what’s happening it will be too late to change it. You cannot change your gender, that’s a lie. 72 genders? That’s a lie as well. Men cannot become women any more than a puppy can become a rattlesnake. The entire LGBTQ+ agenda is built on lies, and these lies will are ripping apart the very fabric of our society.

“Then said he unto the disciples, It is impossible but that offences will come: but woe unto him, through whom they come! It were better for him that a millstone were hanged about his neck, and he cast into the sea, than that he should offend one of these little ones.” Luke 17:1,2 (KJB)

Again we will warn you that the current push to make pedophiles a protected class based on sexual orientation, if not stopped, will be successful. And once that happens, America will be finished. Stone, cold dead. No society can survive where open homosexuality, transgenderism and pedophilia are present, no society ever has in all of human history. When these things rise to the forefront, that nation collapses. America will not be the exception to that rule.

FROM BREITBART NEWS: The Storm Lake Times reported in November that Joseph Matthew Smith, 23, a former Midwest Christian Services (MCS) student, convicted of as many as 15 sex crimes against victims whose ages ranged from 1 to 13 years, was sentenced to prison in December 2015.

On January 16, the Times reported a spokesman from the Iowa attorney general’s office said they are “no longer seeking” Smith’s commitment because “an offender’s hormone levels are an important part of substantiating an offender’s likelihood of recidivism.”

“We don’t believe we have evidence sufficient to prove Josie Smith has a significant chance of reoffending,” spokesman Lynn Hicks said.

According to the report:

Smith has received treatment for gender reassignment over the past two years at Newton Correctional Facility. She first expressed a desire to “get started on transgender classification” in October 2017 and started using female pronouns.

Smith has expressed a preference to identify as Josie, according to court documents.

An Iowa Department of Corrections spokesman said Smith was transferred on Saturday to the Sioux City Residential Treatment Facility for transitional release. He did not say when Smith will be released.

Hicks minimized any concerns the public might have regarding Smith’s release.

The Times said a preliminary report by Dr. Jeffrey Davis, who is described as a state “expert,” states, “The likelihood of re-offending within five years of release exceeded 20% because victims were of both genders, and because Smith was under age 25 and never had a long-term relationship.”

“Mr. Smith has not had an intimate relationship,” the report is said to assert. “His sexual encounters appear to have primarily involved molestation, including his own molestation by multiple perpetrators, or his victimization of others.”

Smith, who spent his childhood in Louisiana, was reportedly molested repeatedly since age seven.

According to the Times, the report recommended that Smith be sent to the Cherokee Civil Commitment Unit for Sex Offenders (CCUSO) for an unspecified period of time. The news story noted, however, the recommendation “was premised upon Smith having the sex drive of a man.”

Dr. Tracy Thomas, a forensic psychologist who once served as clinical director of CCUSO, said that, according to Iowa statute, civil commitment requires the state to “essentially prove an offender has a chance offending greater than 51% for the rest of his life.”

“That becomes harder to prove when an offender significantly lowers his testosterone levels, which has a significantly higher impact on sex drive than estrogen,” the Times wrote. Thomas said there are no women sex offenders at CCUSO.

“From an evaluator’s standpoint, our recommendation is based on whether someone is more than likely to re-offend,” Thomas said. “Between 5 percent and 15 percent of sex offenders re-offend, so it takes an extraordinarily high burden to prove someone has a 51 percent chance.”

Many public commentators expressed shock at the report of the decision to release Smith, including transgender Blaire White, who said in a video message, “This is a disgusting and dangerous precedent”:

NEW VIDEO:
A convicted baby rapist and pedophile is being released from prison because they now identify as a woman.

Yes, you read that correctly. This is a disgusting and dangerous precedent. We need to talk.https://www.youtube.com/watch?v=I9bZirRtoMo … 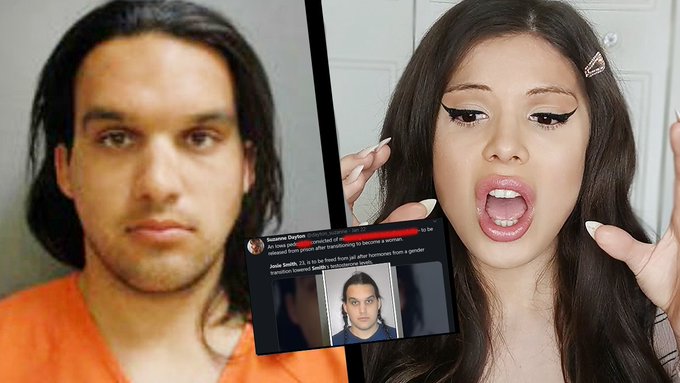 1,961 people are talking about this

Let me tell you something about hormone levels because apparently this decision was made by a bunch of non-trans people who think that when you transition you’re suddenly a different person and then not responsible for the previous crimes that they’ve done and apparently that being on estrogen means that you have no sex drive.

One thing that I think people should probably be educated upon especially, people making decisions like releasing convicts into the general public, probably should know that rape, sexual assault, molestation has almost as much to do with power and just being a sadistic individual that wants to hurt someone for their own gratification then it does like sexual gratification.

Being trans or being on a particular hormone does not erase anything you have ever done, and this is just a disgusting, offensive, like, horrific precedent being set, and I hope, you know, those of you in the LGBT community like myself, speak out about this because this cannot be something that happens. Like here are enough people trying to paint the community as a community of predators, wrongfully so. Let’s not give them a situation where they are right to assume that.

Writer Matt Walsh tweeted that the story of Smith’s release is “absolutely insane.”

Similarly, Christian pro-family activist Elizabeth Johnston, aka The Activist Mommy, posted to Facebook, “This is so disturbing!! Who knows how long it is before countless sex offenders are using this excuse to get off??” READ MORE