Tsipras was sworn in on Monday after his Syriza party won the elections in Greece, but he chose not to take a religious oath at the ceremony.... 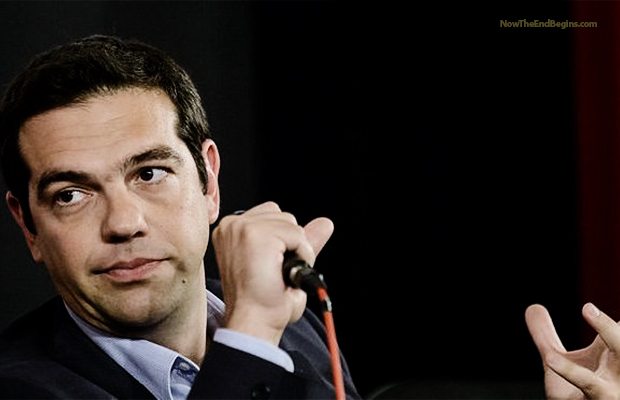 Europe is rapidly realigning itself behind the charismatic new Greek leader

“But in his estate shall he honour the God of forces: and a god whom his fathers knew not shall he honour with gold, and silver, and with precious stones, and pleasant things.” Daniel 11:38 (KJV)

Like Pope Francis in Rome, new Greek Prime Minister Alexis Tsipras is making dizzyingly-fast change in Greece that is having a ripple effect across Europe. The anti-God leader’s example has given rise to atheist leaders in other Euro nations.

Round and round she goes, and where she stops only the prophets know…

Alexis Tsipras, who was sworn in earlier this week as the new Prime Minister of Greece, has become his country’s first openly atheist leader. A survey noted that atheist leaders in Europe are becoming more prominent, with France and Croatia also being led by non-religious figures.

Already there are comparisons between Tsipras and Obama. The adoring crowds. The rock star status. The people really don’t know much about their new PM. Sound familiar?

Tsipras was sworn in on Monday after his Syriza party won the elections in Greece, but he chose not to take a religious oath at the ceremony. Reuters noted that Tsipras, whose left-wing party has opposed austerity measures, broke fromtradition when he decided to take a civil, rather than a biblical oath.

Quartz analyzed public statements from European leaders and identified at least two others who have also said that they are atheists — French President Francois Hollande and Croatian Prime Minister Zoran Milanović.

Hollande, who was raised a Roman Catholic but left the religion, said in 2002: “I have reached a point where what is clear to me is the conviction that God doesn’t exist, rather than the contrary.” He separately added that he respects all faith, but chooses not to have one. source