At least one person has died as demonstrations against an anti-Islam video erupt across Pakistan, a day after protesters tried to storm the US embassy in the capital, Islamabad. ... 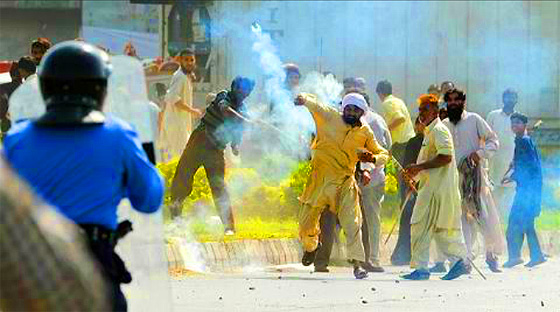 Far from over...
by Geoffrey Grider September 21, 2012
NOW THE END BEGINS SHARE:

At least one person has died as demonstrations against an anti-Islam video erupt across Pakistan, a day after protesters tried to storm the US embassy in the capital, Islamabad.

Angry demonstrators set fire to two cinemas in the northwestern city of Peshawar, police and witnesses said on Friday, as the country began a day of protests.

One protester was wounded when a cinema guard opened fire as crowds armed with clubs and bamboo poles converged on the Firdaus picture house, “smashing it up and setting furniture ablaze”, according to Gohar Ali, a police officer.

Tens of thousands of Pakistanis were expected to take to the streets across the country after the government called an impromptu public holiday to let people protest.

The protests followed clashes on Thursday as security forces used tear gas and live rounds to disperse protesters close to the US embassy in Islamabad.

“Thousand of people have already gathered and more are expected to join in the next half an hour as Friday prayers conclude across the city,” Al Jazeera’s Kamal Hyder reported from the city on Friday.

“The most important thing here will be whether these protesters are able to get close to the diplomatic area as they did yesterday in battles with the police. “The military have taken their position and the police are on alert. They will be trying to avoid a situation like yesterday from happening again.”

In Karachi, police told AFP news agency they were on maximum alert and that bomb-disposal squads were sweeping planned locations of protests.

“All the entry and exit points of the city are heavily guarded. Helicopters are on stand-by for aerial surveillance,” Fayyaz Laghari, provincial police chief, said.

“We have deployed our maximum police force to the sensitive parts of the city to ensure security during protest rallies today.”

Friday was designated a “day of expression of love for the prophet” by the government, which called for peaceful protests against the Innocence of Muslims video produced in the US.

All the major political parties and religious groups announced protests, as did many trade and transport organisations. Large crowds were expected to turn out after Friday prayers.

The previous day, the US embassy became the latest target of protesters angry at the YouTube video. The total number of protesters touched 5,000 with the arrival of protesters carrying the flags of anti-American Islamist groups.

At least 50 people were injured as police fired tear gas and live rounds towards the crowds. source – Al Jazeera