Pakistan's Prime Minister Imran Khan has urged for 'wisdom and better sense' as he opened up for talks with Indian leaders saying: 'If escalation begins from here, where will it go?''Can we afford any miscalculation with the kind of weapons that we have and you have?' he said in a televised statement after both sides said they had shot down each other's warplanes.'I once again invite India to come to the negotiating table,' said Khan, who has called for dialogue with New Delhi in the past.'Better sense should prevail,' he added, before alluding to the nuclear arsenal of both South Asian countries.

Pakistan and India said today they had shot down each other’s warplanes, in a dramatic escalation of the dangerous confrontation between the nuclear-armed rivals.

Both India and Pakistan are nuclear equipped nations, and at the moment they are taking turns shooting down each other’s military aircraft. Pakistan says that Indian fighter jets crossed over into their airspace, which resulted in them being shot from the sky. India immediately retaliated by shooting down a Pakistani F-16 that “violated Indian airspace.” Round and round she goes, where it will stop, only God knows.

FROM THE DAILY MAIL UK: Pakistan said it downed two Indian jets in its airspace and captured two pilots, later amended to one: whom they then seemingly paraded – blindfolded and bloodied – for the camera.

The pilot, named as Wing Commander Abhinandan Varthaman, is seen in a video of what appears to be an interview at a Pakistani Air base, in which he refuses to reveal any information about his capture – or captors.

The video was slammed by India, who called it ‘vulgar’, adding that it expected his ‘immediate and safe return’ in a statement release by the Ministry of External Affairs.

Earlier today, India confirmed the loss of one of its planes and said it had shot down a Pakistani fighter jet, in a conflict played out over the skies of the disputed Himalayan region of Kashmir.

In a sign of the deepening crisis, Pakistan closed its airspace ‘until further notice’. At least six airports were shuttered in India, and a vast area of airspace north of New Delhi was closed to civilian flights.

Pakistan’s Prime Minister Imran Khan has urged for ‘wisdom and better sense’ as he opened up for talks with Indian leaders saying: ‘If escalation begins from here, where will it go?’

‘Can we afford any miscalculation with the kind of weapons that we have and you have?’ he said in a televised statement after both sides said they had shot down each other’s warplanes.

‘I once again invite India to come to the negotiating table,’ said Khan, who has called for dialogue with New Delhi in the past.

‘Better sense should prevail,’ he added, before alluding to the nuclear arsenal of both South Asian countries. 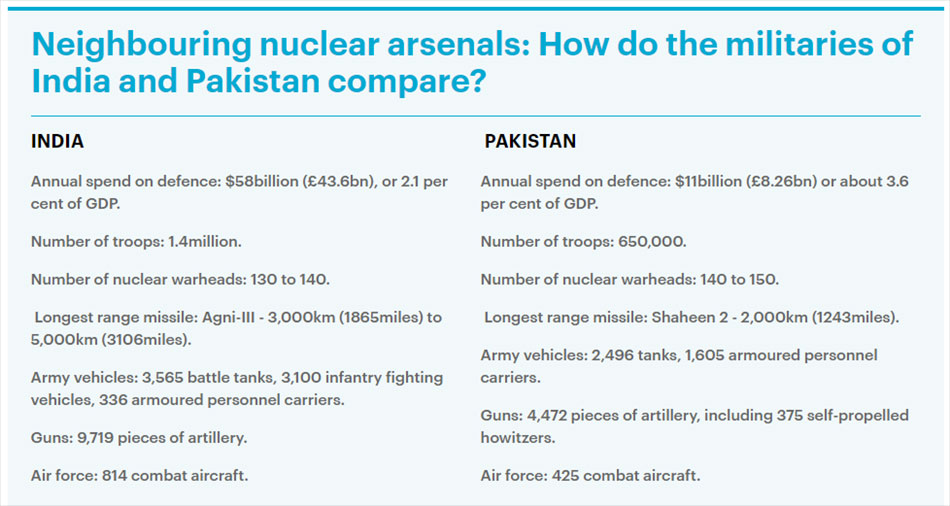 India and Pakistan – both nuclear-armed states – claim all of Kashmir, but control only parts of it.

Khan also repeated the military’s earlier statement that it had shot down two Indian Air Force planes, and that defence personnel was in their custody. Pakistani authorities have maintained that the pilot is ‘being treated well’, however video footage of the capture of Wing Commander Varthaman shows him being beaten up by civilians.

A Pakistani military spokesman said that one of the downed Indian planes had fallen in Pakistani-held Kashmir, while the other came down on the Indian side of the heavily militarised de facto border dividing the territory.

‘We do not want escalation, we do not want to go towards war,’ Major General Asif Ghafoor told a press conference, calling for talks with New Delhi.

One of the captured pilots was in custody and the other was in hospital, he said.

Ghafoor said the jets had been shot down after Pakistani planes earlier flew across the Line of Control, the de facto border in Kashmir, to the Indian side in a show of strength, hitting non-military targets including supply depots.

Afterwards, he said, the two Indian planes crossed the LoC into Pakistani airspace.

‘The Pakistan Air Force was ready, they took them on, there was an engagement. As a result both the Indian planes were shot down and the wreckage of one fell on our side while the wreckage of the other fell on their side,’ he said. READ MORE