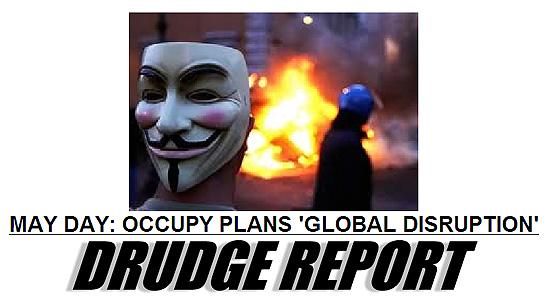 Did YOU know that the Occupy Wall Street movement is funded by non other than...wait for it....George Soros? It's true!
by Geoffrey Grider April 30, 2012
NOW THE END BEGINS SHARE:

Occupy Wall Street demonstrators, whose anti-greed message spread worldwide during an eight-week encampment in Lower Manhattan last year, plan marches across the globe tomorrow calling attention to what they say are abuses of power and wealth.

Did YOU know that the Occupy Wall Street movement is funded by non other than...wait for it....George Soros? It's true!

Organizers say they hope the coordinated events will mark a spring resurgence of the movement after a quiet winter. Calls for a general strike with no work, no school, no banking and no shopping have sprung up on websites in Toronto, Barcelona, London, Kuala Lumpur and Sydney, among hundreds of cities in North America, Europe and Asia.

In New York, Occupy Wall Street will join scores of labor organizations observing May 1, traditionally recognized as International Workers’ Day. They plan marches from Union Square to Lower Manhattan and a “pop-up occupation” of Bryant Park on Sixth Avenue, across the street from Bank of America’s Corp.’s 55-story tower.

“We call upon people to refrain from shopping, walk out of class, take the day off of work and other creative forms of resistance disrupting the status quo,” organizers said in an April 26 e-mail.

Occupy groups across the U.S. have protested economic disparity, decrying high foreclosure and unemployment rates that hurt average Americans while bankers and financial executives received bonuses and taxpayer-funded bailouts. In the past six months, similar groups, using social media and other tools, have sprung up in Europe, Asia and Latin America.

The Occupy movement in New York has relied on demonstrations and marches around the city since Nov. 15, when police ousted hundreds of protesters from their headquarters in Zuccotti Park near Wall Street, where they had camped since Sept. 17.

Banks have pooled resources and cooperated to gather intelligence after learning of plans to picket 99 institutions and companies, followed by what organizers have described as an 8 p.m. “radical after-party” in an undetermined Financial District location.

“If the banks anticipate outrage from everyday citizens, it’s revealing of their own guilt,” said Shane Patrick, a member of the Occupy Wall Street press team. “If they hadn’t been participating in maneuvers that sent the economy into the ditch, we wouldn’t even be having this conversation.”

New York police can handle picketers, according to Paul Browne, the department’s chief spokesman. “We’re experienced at accommodating lawful protests and responding appropriately to anyone who engages in unlawful activity, and we’re prepared to do both,” he said in an interview.

About 2,100 Occupy Wall Street protesters in New York have been arrested since the demonstrations began, said Bill Dobbs, a member of the group’s media-relations team.

Organizers describe the May Day events as a coming together of the Occupy movement, with activists also calling for more open immigration laws, expanded labor rights and cheaper financing for higher education. Financial institutions remain a primary target of the protests.

“Four years after the financial crisis, not a single of the too-big-to-fail banks is smaller; in fact, they all continue to grow in size and risk,” the group’s press office said in an April 26 e-mail.

Occupy Wall Street began planning for May Day in January, meeting in churches and union halls with a decision-making system that avoids a single leader. Instead, participants rely on group “break-out” sessions in which clusters discuss such tasks as crowd-building, logistics and communications.

About 150 attended an April 25 meeting at the Greenwich Village headquarters of the Amalgamated Clothing & Textile Workers Union, making last-minute preparations for how to deploy legal and medical help; site selection for picketing; purchasing, production and distribution of protest signs; and how to talk to reporters.

The meeting convened inside the union hall basement, where attendees arranged chairs in a circle as three facilitators asked each of the assembled to identify themselves by first name and gender — he, she or they. Most appeared under age 30, though gray-haired baby boomers also participated. One of the older attendees pulled a ski mask over his head to protest the presence of a photographer from Tokyo.

Tomorrow, beginning at 8 a.m. in Bryant Park, scheduled events include teach-ins, art performances and a staging area for “direct action and civil disobedience,” such as bank blockades.

Tom Morello of the Grammy Award-winning rock band Rage Against the Machine along with 1,000 other guitar-playing musicians will accompany a march to Union Square at 2 p.m., according to the maydaynyc.org website. That will be followed by a “unity rally” at Union Square at 4 p.m.; a march from there to Wall Street at 5:30 p.m.; and a walk to a staging area for “evening actions,” which organizers at the April 25 meeting said would be the so-called after-party.

Occupy-related events are planned in 115 cities throughout the U.S., from college towns such as Amherst, Massachusetts, and Ann Arbor, Michigan, to Los Angeles, Houston, Chicago and Philadelphia.

In San Francisco, demonstrators intend to hold a rally at the toll plaza of the Golden Gate Bridge from 7 a.m. to 10 a.m. local time that “will result in the shutdown,” according to their website.

Across the bay in Oakland, protesters said they intend morning marches on banks and the Chamber of Commerce, followed by an afternoon rally and a march downtown.

“We’re looking forward to vigorously asserting our constitutional right to protest and giving a loud outcry about Wall Street and greed,” Dobbs said. “We’re hoping this will make a splash. We hope it will bring a lot of more people into the Occupy movement.” source – Bloomberg