Hundreds of hooded, masked protesters rampaged through Rome in some of the worst violence in the Italian capital for years Saturday, torching cars and breaking windows during a larger... 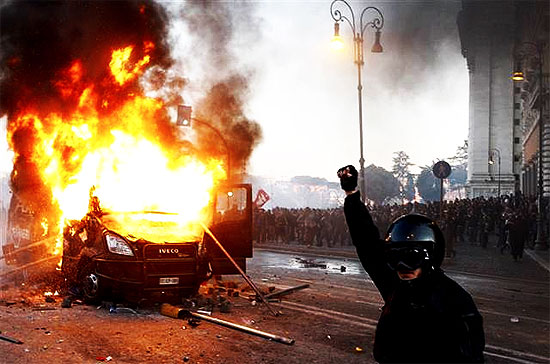 A demonstrator celebrates as a Carabinieri police vehicle burns during a demonstration of the "Indignant" group in Rome on Saturday.
by Geoffrey Grider October 15, 2011
NOW THE END BEGINS SHARE:

Hundreds of hooded, masked protesters rampaged through Rome in some of the worst violence in the Italian capital for years Saturday, torching cars and breaking windows during a larger peaceful protest against elites blamed for economic downturn.

A demonstrator celebrates as a Carabinieri police vehicle burns during a demonstration of the "Indignant" group in Rome on Saturday.

Police repeatedly fired tear gas and water cannon in attempts to disperse them but the clashes with a minority of violent demonstrators stretched into the evening, hours after tens of thousands of people in Rome joined a global “day of rage” against bankers and politicians.

Smoke rose over many parts of the neighborhood between the Colosseum and St John’s Basilica, forcing many residents and peaceful demonstrators to run into buildings and churches for shelter as militant protesters ran wild.

After police managed to push the well-organized radicals away from the St. John’s area, they ravaged a major thoroughfare, the Via Merulana — building barricades with garbage cans and setting the netting of the scaffolding of a building on fire.

Discontent is smoldering in Italy over high unemployment, political paralysis and 60 billion euros ($83 billion) of austerity measures that have raised taxes and the cost of health care.

The violence at times resembled urban guerrilla warfare as protesters hurled rocks, bottles and fireworks at police, who responded by repeatedly charging the demonstrators.

Around 70 people were injured, according to news reports, including one man who tried to stop the protesters from throwing bottles. source- MSNBC